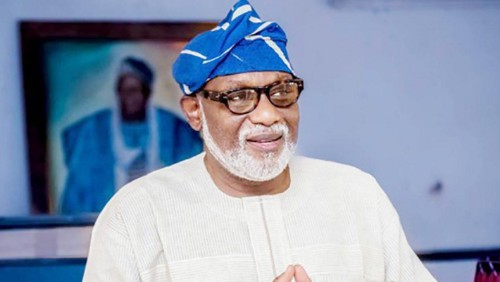 The executive governor of Ondo State, Rotimi Akeredolu, has denied tampering with funds belonging to the local government areas in the state.

Akeredolu stated this while reacting to the allegation by President Muhammadu Buhari, accusing governors of stealing local government funds.

Gunmen Kidnap Benue Commissioner, Three Others On Thier Way From Otukpo

In a statement signed by his Chief Press Secretary, Richard Olatunde, on Saturday, the governor said his administration had not touched funds meant for local governments since its inception.

He also said his administration did receive 13 percent oil derivation, subsidy, and SURE-P refunds from the federation account in the last two years of 2021 and 2022, explaining that the refunds received from the Federal Government were judiciously expended on some key capital projects across the three senatorial districts of the state.

The statement added, “As a matter of policy, monies meant for local governments are shared at their monthly Joint Account Allocation Committee. Mr Governor doesn’t touch local government funds. The local government chairmen can attest to the fact that they have total freedom in the management of their funds.

“The monthly FAAC receipts are devoted to the payment of salaries and pensions as agreed by labour leaders at the monthly meetings presided over by the Head of Service and Chairman of Joint Negotiating Council. Despite Governor Akeredolu’s vow to always pay salaries and pensions as and when due, the financial crisis across the country occasioned by the outbreak of the Covid-19 pandemic resulted in non-payment of salaries in full for some months. As of January 2022, the government owed four months’ salary arrears as against the seven months inherited.

“Governor Akeredolu, having promised the civil servants in the state to prioritise payment of salaries, has continued to clear these backlogs of arrears. On three occasions this year, the government has paid double salaries in a month, thereby reducing the arrears. All salaries will be cleared before the year ends.

“If the amount expended on these infrastructural projects and payment of salary arrears is juxtaposed with the refunds, it is crystal clear that the monies were not mismanaged in Ondo State.

“The administration of Governor Akeredolu stands on the tripod of transparency, accountability, and integrity. We will continue to hoist the flag of transparency in governance while pursuing excellence in the journey to transform the state for the better.”