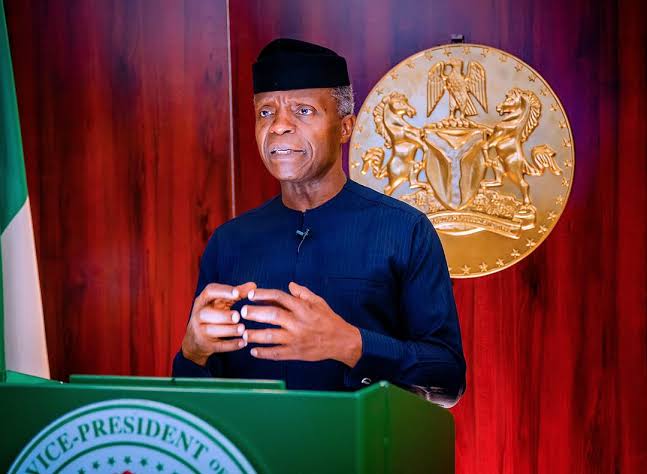 The Osinbajo Southwest Group (OSG) on Sunday at a press conference in Lagos said Vice President Yemi Osinbajo, SAN, is the best qualified for the office of President of the Federal Republic of Nigeria and Commander–In–Chief of the Armed Forces.

The Group said Osinbajo’s God-given intellectual capacity, firm belief in the ability of the younger generation, and deep understanding of the economy make him stand out from the crowd of contenders.

In a statement by OSG and read during the press conference by the Director of Mobilization, Hon. Olawale Shodeinde, said Professor Yemi Osinbajo SAN, is cerebral, eloquent, healthy, dependable, energetic, and experienced. For seven years, Professor Yemi Osinbajo has stood resolutely behind his principal and never wavered for once. 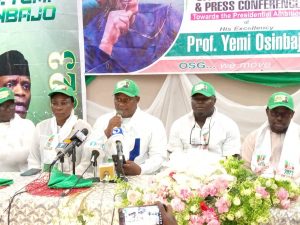 Read the statement in full below;

“Today, we have again converged for the Lagos leg of our Solidarity Campaign which incidentally is the first of its kind after the All Progressives Congress (APC) National Convention that was held on Saturday 26th March 2022. For those who could read in-between-the-line, the just concluded APC National Convention had subtle handwriting on the wall”.

“Let us first congratulate the APC for a successful convention and the newly elected members of the party’s National Working Committee”.

“The fatherly role played by Mr. President, Muhammadu Buhari, to ensure that the proceedings took place with negligible rancor must be acknowledged. The emergence of His Excellency, Former Governor of Nasarawa State, Senator Abdullahi Adamu, shows that the party is now ready to consolidate on its achievements and will produce the best presidential candidate amongst the aspirants. We congratulate all party faithful for this great achievement.

The sole objective of our convergence today is to come together as Nigerians and collectively speak in unity and one accord.

Our gathering primarily centers on the presidential ambition of His Excellency, Professor Yemi Osinbajo SAN, GCON, knowing full well that the long-awaited moment of his declaration to run is very much at hand.

We welcome each one of you from far and near to this epoch-making event and pre-declaration conference in the Centre of Excellence.

It is our solemn belief that your departure will be as memorable as your arrival.

It is undoubtedly true that Nigeria needs a leader with critical thinking, sound economic ideas, integrity, foresight, character, competence, and charisma. Someone of impeccable credentials, tested and proven will deliver the country of our dreams and take us to the promised land.

Our dear country yearns to be led by a true Omoluabi.

Given the infrastructural revolution that the President Buhari administration has kicked off and the millions of families that his Social Investment Programmes have positively impacted, it is not out of place to say that this administration deserves more praise than it gets. For the President’s legacy to remain intact and live on, his successor must be of like minds… a true progressive with the sincerity of purpose to build on what has started and the vision to build an economy that will banish hunger and build wealth, thereby suffocating the embers of strife and violence that threaten to taint the present administration.

It is in the light of all these that our organization, the Osinbajo Southwest Group (OSG), was conceived to advocate for good governance.

Our vision is to promote sound, equitable and prosperous leadership in the country. We hope to achieve this by promoting good governance through the dutiful participation of all stakeholders.

Since our last event, we have gone to the people individually and collectively.

We have consulted leaders and followers. We have spoken to the rich and the poor.

There have been many disagreements but one point remains indisputable…

Prof. Yemi Osinbajo, SAN, is the best qualified for the office of President of the Federal Republic of Nigeria and Commander – In – Chief of the Armed Forces. His God-given intellectual capacity, firm belief in the ability of the younger generation, and his deep understanding of the economy make him stand out from the crowd of contenders.

He has acted as President several times and has given a good account of himself.

Our gathering here today, therefore is to amplify his obvious merits and to give the society, especially the voting populace, the firm assurance that Prof Yemi Osinbajo SHALL soon indicate his interest and declare for the 2023 presidential race.

We are not in doubt that the Vice President will chart a new course to lead this country and move it forward. He will fix and initiate a process to heal this nation by bringing together all stakeholders without ethnic or religious divides.

“As the Chairman of the National Economic Council, he has promoted novel ideas to keep our economy growing. It was under his watch as the Head of the Economic Recovery Team that Nigeria became one of the first countries to exit the recession brought about by the unexpected pandemic that hit in 2020. With his guidance, Nigeria has moved up several steps in the global Ease of Doing Business rankings. He has been the biggest promoter of Small and Medium Scale Enterprises by always advocating for them to be supported by the government and traveling around the country to meet them individually. He was also the instigator of the many variants of the government’s Social Investment Programmes that have fed over 9 million Primary School children and given succour to millions of petty traders”.

“Prof Yemi Osinbajo’s interventions have led to Nigeria becoming the home of no less than six unicorns in the tech space. Microsoft, Google and other international technology giants are beating the path to Nigeria following meetings with the brilliant Vice President. He is highly regarded in the NGO world and has earned the respect and accolades of the leadership of great nations like Canada and France. He is truly a rare gem… one Nigerians can ill-afford to miss at this time”.

“We again appeal to Mr. President, His Excellency, President Muhammadu Buhari, GCFR, all Thirty-Six (36) State Governors, FCT, Senate, 360 members of the National Assembly, 774 Local Government Chairmen and the leadership of the All Progressives Congress (APC) to endorse a worthy candidate in Professor Yemi Osinbajo and give Nigerians a taste of his brilliance. Let us join hands with you to lift our country into greatness under the leadership of a true God-fearing man.

Being a part of the current administration, Prof. Yemi Osinbajo understands the challenges faced by this country and will hit the ground running when sworn-in on May 29th, 2023. With him on the ballot, we are sure that he will harvest votes from every region in the country and become an inspiration to the millions of educated Nigerians across the world, who are only looking for a good enough reason to return home. With him in the saddle, the ‘Japa Mentality’ of our Youth will be put on hold and our economy will progress exponentially.

In the light of all that has been said, we hereby call on the Vice President of Nigeria, Professor Yemi Osinbajo, SAN, despite all political tethers to evoke the doctrine of service-above-self and make an open declaration to over 200 million patiently waiting Nigerians on his 2023 Presidential Bid. We appeal to him to declare as millions of Nigerians across the country and abroad are waiting anxiously with the belief that he is the best for Nation.

A ship that doesn’t leave the harbour will not catch glimpse of the ocean.