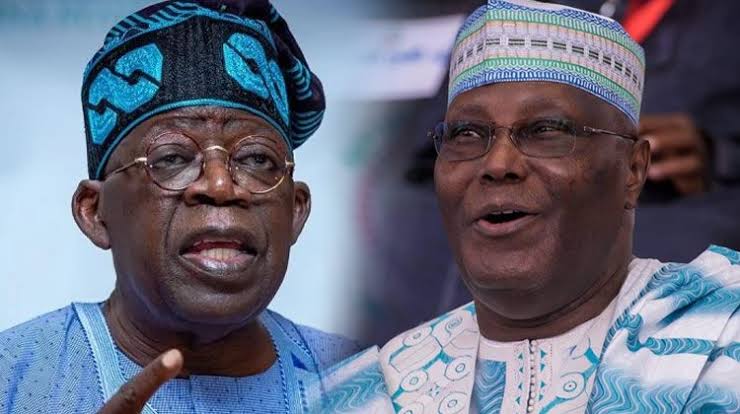 The Disciples of Jagaban (DOJ), a major support group of the presidential candidate of the All Progressives Congress, APC, Bola Tinubu, has advised the presidential candidate of the Peoples Democratic Party, (PDP), Atiku Abubakar to join forces with the former Lagos State Governor to rescue Nigeria.
Applesbite reports that the group made this known in a statement on Wednesday, hours after it was revealed that Tinubu met with the Governor of Rivers State, Nyesom Wike, in London on Monday night.

According to the National Coordinator of the group, Abdulhakeem Adegoke Alawuje, Atiku Abubakar knows the next president of Nigeria would be Bola Tinubu.

He stated that Obi has allowed himself to be, “completely carried away by social media frenzy and fake prophets that see nothing but lies.”

“Comes 2023, the bitter truth that must be told is that Atiku himself knows Tinubu is the next president of Nigeria. It’s only the overrated Obi who is rather deceiving himself,” he said.

He also urged spiritual leaders of notable religions and faiths to start supporting Tinubu with prayers for God’s assistance.

“Our appeal, therefore, goes to spiritual leaders of notable religions and faiths. It’s time to start supporting Tinubu with prayers for God’s assistance and protection in the overall interest of our nation and for the sake of the unborn generation.

“All well-meaning individuals and elder statesmen like Chief Olusegun Obasanjo, Ibrahim Babangida, Theophilus Danjuma, Abdulsalami Abubakar, Chief Edwin Clarke, including true leaders of socio-cultural groups should all come together to rally around Tinubu to rewrite Nigeria’s history,” he added.