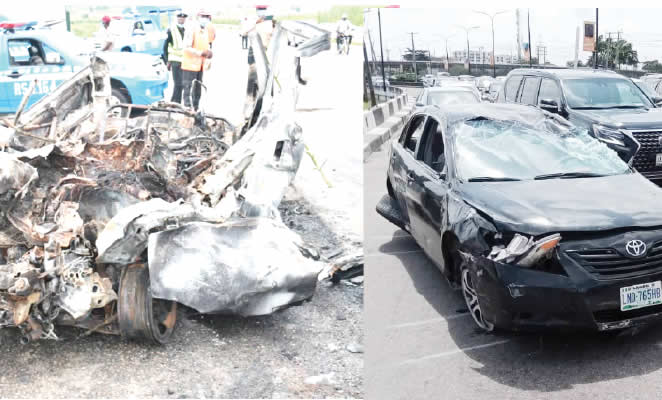 Nineteen persons on Sunday lost their lives in an accident at the Gwagwalada-Lokoja Highway Road area of the Federal Capital Territory, Abuja.

Federal Road Safety Corps spokesperson, Bisi Kazeem, in a statement, said the acting Corps Marshal, FRSC, Dauda Biu, confirmed that 19 victims were burnt to death, adding that eight other persons, who sustained injuries during the accident, had been rushed to the hospital for treatment.

2023: Five Prominent Clerics Who Have Pledged Allegiance To Tinubu Despite Same Faith Ticket

The statement read, “The Toyota Hiace Bus with number plate, MUB- 30 LG, which was on a high speed crashed into a Citroen trailer on motion and immediately went into flames thereby burning the entire occupants of the vehicle to death.

“In the same vein, the second bus also crashed into the crashed bus from behind and also caught fire. One of the Buses was said to have transited all the way from Takai, Kano State, heading to Benin, Edo State.

“While the Citroen trailer loaded with chicken feed from Zaria, Kaduna State was on its way to deliver the commodities in Akwa Ibom State.

“The rescue operations were jointly carried out by the combined teams of Zebra 6 Yangoji and patrol teams of the Nigeria Police Force. The injured victims were rescued and taken to Rhema Hospital, Kwali, while one of the male corpses was deposited at the Kwali General Hospital Mortuary.

“However, the 19 corpses burnt beyond recognition which were trapped in the vehicle have been extricated by rescue operatives of the Zebra 6 Yangoji.”

Biu advised commuters to always avoid excessive speed and ensure that their journey falls within day time so as to minimise the level of casualties recorded as a result of night trips.

Applesbite gathered that the commercial motorcyclists were driving against the traffic inward Ogun when the accident happened.

Confirming the accident, the state Police Public Relations Officer, Abímbola Oyeyemi, said the two motorcyclists died on the spot while the passenger died during treatment in hospital.

“A motorcyclist was driving one-way and collided with another motorcycle which was driving on the right way. The two riders died on the spot but a passenger who was among them died at the hospital.”

In another development in Lagos State, no fewer than five persons narrowly escaped death in an accident that occurred at Dolphin Estate, in the Ikoyi area of Lagos State.

The spokesperson for the Lagos State Traffic Management Authority, Taofik Adebayo, confirmed the incident to our correspondent.

He said, “The accident occurred in the Ikoyi area of Lagos State. It involved two vehicles, and five people who were seriously injured have been taken to the hospital for intensive care.

“Our men have been deployed to manage the traffic there. We implore motorists coming from that axis to be patient while our men manage the situation.”