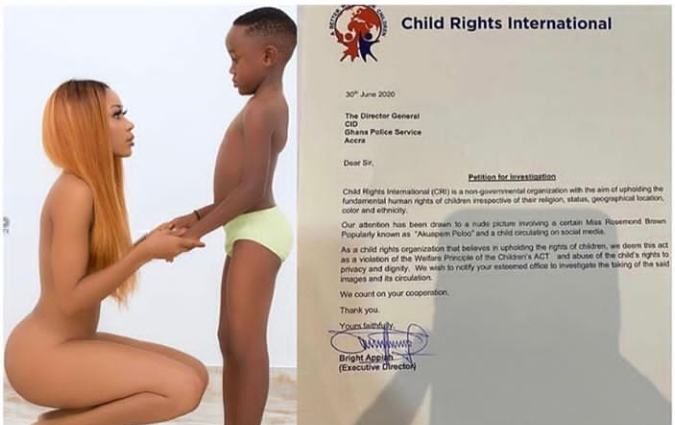 Akuapem Poloo nude photo pose with son that was intended to spark a trend online has gone south, as Child Rights International, a non-governmental organisation in Ghana, has petitioned the petitioned the Inspector-General of Police to investigate actress.

Naked Photos of Akuapem Poloo and her son had surfaced on the internet on Tuesday, June 30 to mark the boy’s birthday.

The picture shows a totally nude Ms Brown kneeling before her standing son who was just in his underwear, who was celebrating his 7th birthday.

In its petition to the IG of Police, Child Right International said the actress should be investigated for indecent exposure.

“As a child’s right organisation that believes in upholding the rights of the citizenry, we deem this act as a violation of the welfare principle of the Children’s Act and abuse of the child’s right to privacy and dignity. We wish to notify your esteem office to investigate the taking of the said images and its circulation,” Child Right International said in its petition.

Ms Brown took the pictures and posted them on her Instagram page to celebrate her son’s birthday.

The picture was accompanied by the following unedited statement:

“Son today reminds me of the very day I gave birth to you with no stress and with no regret…30th June 2013 exactly 4:46am Sunday Haha I still remember this date paa because it’s really meant a lot to me, I only felt the 30 minutes pain when you were turning to come out you were soo good to me. I gave birth with no complication, no cut no disability

Haha I love you son. You see how you looking at me always remember that I love you. I’m naked in front of you because this is how naked I was giving birth to you, so in case you find me naked lying somewhere don’t pass by me but rather see me as your mom who brought you to life.”