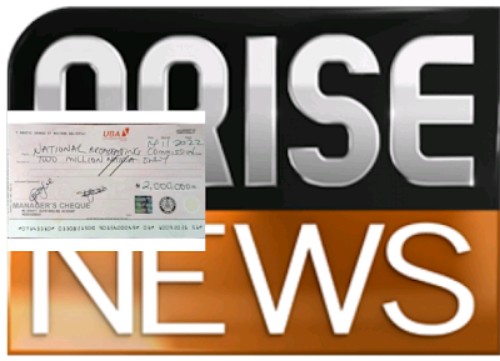 Arise TV has accepted and paid the N2million fine slammed on it by the National Broadcasting Commission (NBC) for airing fake news on the presidential candidate of the All Progressives Congress (APC), Asiwaju Bola Tinubu.

The TV station ran a story that the Independent National Electoral Commission (INEC) was investigating Tinubu over a court case in the US, a claim which was later denied by the electoral body.

This caused the NBC to slam a fine of N2 million on the TV station for breach of the Nigerian Broadcasting Code.

In a letter to the Director General of the NBC, Balarabe Ilelah by Arise TV General Counsel and Legal Adviser Ebunoluwa Awosika, the station said it accepted the fine for its error.

It also said all erring officers had already been punished, while also attaching the evidence of the payment of the N2million fine.

There is no excuse for such a professional glitch. The purported press release aired in error on Saturday the 12th of November 2022 should not have been aired and it was gross negligence that it was allowed to air. In realizing the error, the Managing Editor immediately withdrew the content and issued an unreserved apology for the unfortunate incident.

“At Arise News Channel, we have the highest standards of professional conduct, ethics, and excellence with a painstaking process for news verification and authentication. This process was breached last Saturday when most editorial personnel were not on duty.

“The Ombudsman of the Arise News Channel was called in by the Board to investigate the breach and appropriate sanctions have been meted out to all concerned, including the suspension of a Deputy Director of News, for flouting our very stringent news gathering and broadcasting process.

“At Arise News Channel, we have zero tolerance for unverified reports and we assure you and our audiences that we have reviewed and tightened all the processes through which the error slipped through on a weekend.

“We take no sides with any political party or candidate and will continue to give equal access and coverage to all contestants.

“Please find attached, a bank draft for N2,000,000 (Two Million Naira) in fulfilment of your sanction.

“We will continue to work with you to uphold all standards of professional excellence in journalism and broadcasting for the greater good of the Federal Republic of Nigeria,” the letter read. 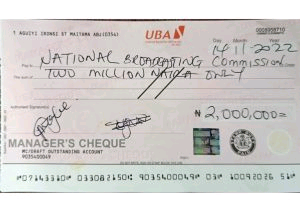