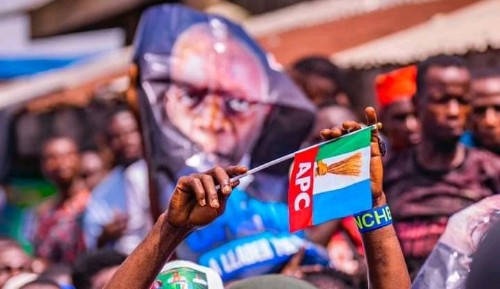 The Tinubu/Shettima presidential campaign council of the All Progressives Congress (APC) says Bola Tinubu, its candidate, developed Lagos — contrary to a claim by Atiku Abubakar.

While speaking earlier on Monday at a rally in Lagos, Abubakar, presidential candidate of the Peoples Democratic Party (PDP), said the APC “lied” about developing Lagos state.

Responding in a statement, Festus Keyamo, spokesman of the Tinubu/Shettima campaign council, said Abubakar’s position shows he is getting frustrated.

“In more volatile climes, the people of Lagos State would not have allowed Atiku Abubakar to step on the soil of Lagos State because of that ignoble role his government played to attempt to destroy Lagos,” Keyamo said.

“But thanks to Asiwaju, today, Lagos is a peaceful place and a home for all. Hence, he could still come to Lagos to spew such lies to the people of Lagos state.

“It was after Asiwaju assumed office in 1999 that he began to revive and rebuild the infrastructure in Lagos State. A clear example is the Bar Beach the FG could not contain in all their years in Lagos State.

“It was during the tenure of Tinubu that the idea for the Eko Atlantic was conceived and planned and the continuation of the project proceeded unhindered under Fashola who has himself acknowledged the making of it to Tinubu.

“It is obvious Atiku Abubakar and the PDP have their backs against the wall with the rebellion to and shunning of his campaign by key governors and stakeholders in his party that has made him battle weary.

“Atiku Abubakar is already showing signs of frustration. We advise Atiku Abubakar to pack up his campaign to save his face rather than face the imminent disgrace at the polls.”