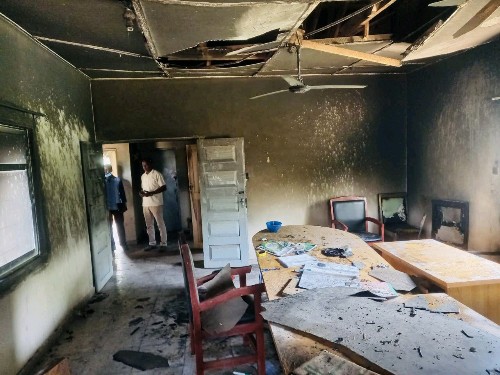 The Independent National Electoral Commission (INEC) says the recent attacks on its facilities will not stop the conduct of 2023 general election.

Mahmood Yakubu, INEC chairman, said this on Monday when he received a delegation from the African Union special pre-electoral political mission in Abuja.

Speaking on Monday, Yakubu assured Nigerians that INEC would replace the damaged election materials ahead of the election.

“In the last three weeks, three of our local government area offices were attacked in three different states of the federation, and the last one occurred yesterday in the south-eastern part of the country,” he said.

“Although there were no casualties, quite a number of the materials already acquired and delivered for the elections have been lost.

“Now, the good thing is that so far, we can recover from all the losses but it’s a source of concern. This shouldn’t be allowed to continue.

“So, we will continue to engage with the security agencies to make sure that these offices as well as personnel and our facilities are protected ahead of the election.

“We may express some concern about the attack on these facilities, but it will never deter the commission from going ahead with the election as scheduled.”

Yakubu said INEC may suffer hitches , but it is better prepared for the 2023 general election.

“We are required to proceed in the manner that the law requires us to do using the deployment of technology for the purpose of accreditation and uploading of polling unit level result from the PU on election day for transparency,” he said.

“The good thing is that since we started this process, we hear less and less of litigation arising from the conduct of elections by the commission.

“Now, we have more litigations arising from the conduct of primaries by political parties rather than the main election conducted by the commission.”