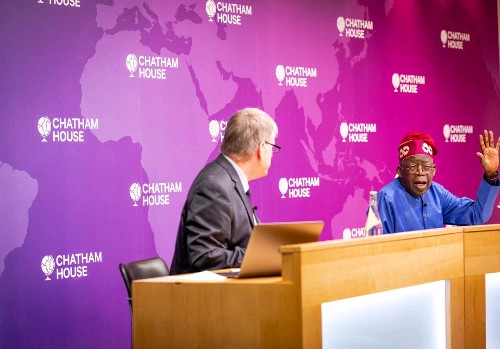 Dele Alake, director of strategic communication of the All Progressives Congress (APC) presidential campaign council, has spoken on why Bola Tinubu delegated questions while giving an address at the Chatham House.

On Monday, Tinubu, APC presidential candidate, spoke at the Chatham House in the United Kingdom.

Dogara Fires Back At Wike Over Atiku Endorsement, Says ‘You Are Suffering From Amnesia’

At the Chatham House, Tinubu spoke about his action plan for Nigeria and addressed questions on the controversy concerning his age and refusal to attend debate.

During the engagement, the APC presidential candidate asked some persons on his team, including Femi Gbajabiamila, speaker of the house of representatives, and Nasir el-Rufai, governor of Kaduna, to answer questions on his behalf.

Tinubu’s action has, however, elicited reactions on social media as some Nigerians have questioned his decision to not answer all the questions himself.

Speaking in an interview with Channels Television, Alake said delegating questions to team members is “one of the innovations” of Tinubu.

“This is one of the innovations of asiwaju Tinubu. Don’t forget that one of his main solid strengths has been identifying talents,” he said.

“Anybody who has his head properly screwed on his head would know that Asiwaju is the primus inter pares in team building; that is what he sought to display.

“Everybody acknowledges his talents in showcasing professional and technocratic experts in various fields. Those who are saying what you have just said are ignorant of the nuances and dynamics of leadership. Leadership is not a one-man show.

“Successful leadership is one based on a team that is professional and highly skilled. Asiwaju has been noted to be an advocate of that and that is what he displayed.

“Apart from delegating, he also answered questions personally and directly. He wanted to show the calibre of his team and that is what he equally did at the Eko Hotel town hall meeting.

“That style is being copied by some of his opponents but they can’t get the traction because they don’t have the solid team like he has.”