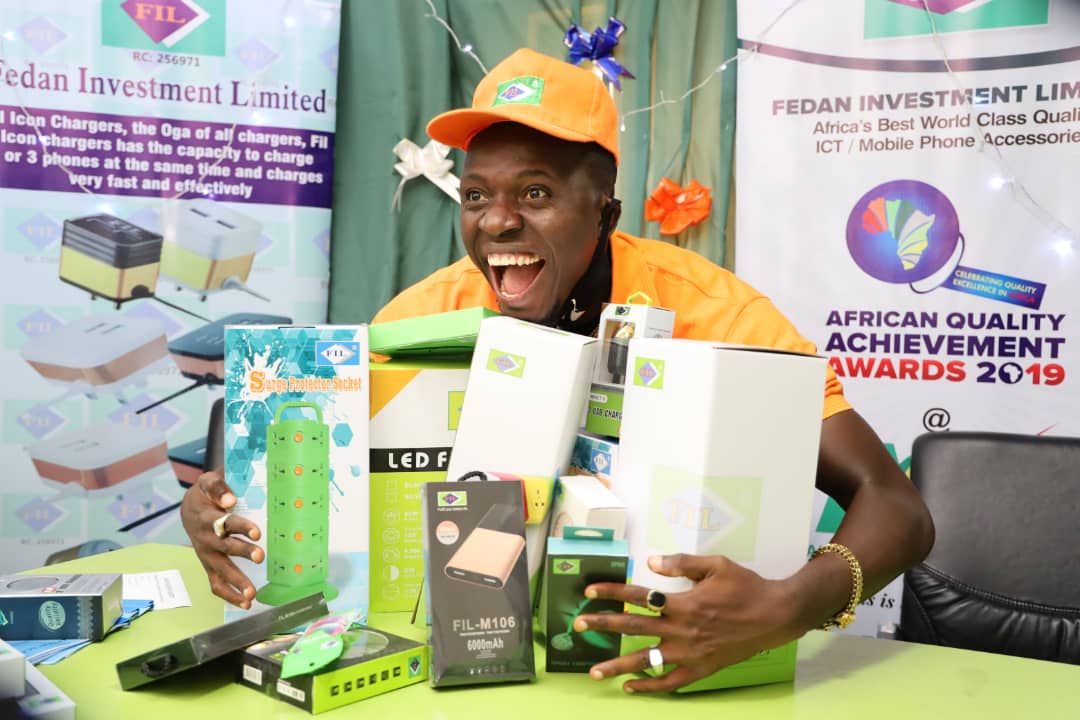 The event which was held in the conference room of the company's corporate head office in Lagos on Monday, July 13, was kicked off by the company's Admin Manager Mr. David Agbede who seized the moment to welcome guests and members of the Press present as he also introduced the management and staffs of the hallowed electro company before calling on the company's General Manager Mr. Joel Agba who welcomed the house as he proceeded with briefs about the company and the essence of the gathering.


The G.M stated that the day will remain remarkable for the company as the company has taken a step further in its quest to maintain her top position and standard in the electrical and mobile phone accessories market, he added that as a result of the top quality FIL brands are known for, the company resolved to add an extra touch to add splendour to their essence by adding a new member on board in the person of Akpororo as the company's brand ambassador with the primary goal of spreading the gospel of FIL range of products accross the globe. He concluded that he is assured beyond doubts that this association will yield incredible results as well as properly address the issue of customer to company relationship.

The Chairman and Managing Director of Fedan Investment Company FIL, Mr. Stephen Amechi Chinemelum in his brief while addressing the house stated that this is one of the step amongst the company's several plans which is soon to be revealed to maintain their standard as well as return excellence to their teeming consumers, He added that the company has made the issue of quality paramount in their objectives and as such thought of the need to replicate it in their choice of Akpororo as the company's official brand ambassador, in his words:

The brand ambassador represent and share same ideology with the company which is God-first, here in FIL, we place God first in all of our undertaking and the result is our top and leadership position in the market today.

After the official signing of the ambassadorial contract papers between Akpororo, the company MD and DMD under the supervision of the company's Legal Adviser, FIL brand ambassador Akpororo took his time to relay his appreciation to the management and staff of Fedan Investment Limited FIL for finding him worthy of such investure, he assured the company of his readiness to work and discharge his duty effectively to the company, In Akpororo words:

Responding to the Press, the FIL ambassador told members of the Press that he shall use all necessary avenues as well as his personal capacities to affect his duties as the company's brand ambassador, he added that he had the right number of audience as a top comedian to actualise progressive fetes for the company.

FIL Chairman and Managing Director Mr. Stephen Amechi Chinemelum also informed the Press that the company's products remain number one in the electronic market and that the standard of their products is what they intend to maintain as electronic dealers in Nigeria and Africa generally, He concluded that there are only two electronic and phone accessories companies in Africa, FIL and others.

The event was brought to an end with with the closing remark said by the company's Deputy Managing Director, Mr. Tony Emeka Chinemelum, He appreciated the house for time and adored the day for being vital in the history of Fedan Investment Limited, He stated his assurance in the service and choice of the brand ambassador Akpororo as he included the company has a good and existing relationship between the brand and the company as he has no doubt that Akpororo will deliver his ambassorial duties effectively.

He concluded that the company's standard which is to remain in the No 1 is priceless as also displayed in their choice of brand ambassador who maintains and shares the company's primary ideals which is the service to God and humanity.

Next Read: GoKada CEO Hacked to Death In Apartment