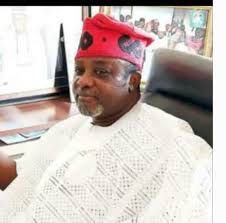 The Assistant Director of Publicity of the All Progressives Congress Presidential Campaign Council APC-PCC, Otunba Biodun Ajiboye has defended the party’s Presidential Candidate, Asiwaju Bola Ahmed Tinubu on his decision to ask members of his team to answer some questions put across to him after his address in Chatham House, in the United Kingdom on Monday December 5, 2022.

Ajiboye stated that Asiwaju Bola Ahmed Tinubu spoke for 28 minutes to deliver his lecture in Chatham House, which he said was clear in the brains of those who cared to listen, but that some people just wanted to criticise him.

He stressed that Bola Tinubu is a newsmaker, and that anything he does attracts attention, but that some people are hurt and sometimes come up with diatribes and news analysis as well as news reportage on the issues affecting him the way they want.

“Their language is not a reflection of reality. He answered the questions directly. They asked him about youths and education and he said he would take it by himself and he did.

“If they think that his strategy is strange, they should tell us and we will explain to those who don’t understand simplicity in leadership and how leadership has taken an innovative dimension globally.

“Tinubu is the Presidential Candidate of the largest political party in Africa. He was a governor, he was a senator and he was a party leader.

“He said that he wanted to be the president of Nigeria. He is a team leader, he builds team, the world knows him for his dexterity in building a team.

“He has done that over the years and he has been successful and no one in Nigeria has built a successful team as Bola Tinubu has done. He said that he wanted to show before the world that he will build a virile team that will take Nigeria out of the doldrums.

“He showcased the calibre of Dele Alake that has established a lot of radio and television stations, a successful journalist, who was a commissioner for information in 1999. There is also the calibre of Governor Nasir El-Rufai of Kaduna State. These people are successful and he is building a team,” he said.

According to him, they asked Tinubu questions and he called people to answer them since they built the programmes together and they have rehearsed.

Leadership, he said, is dynamic, adding that it’s the fault of those who don’t understand Tinubu’s style of leadership.

He said; “Tinubu likes to showcase his team and he has done that successfully. He is smart enough to understand the nitty gritty of the subject matter.

“Therefore, when a question was asked about youths and education, he said that he would take it by himself and he did. He spoke on technology, ICT, empowering the youths and all that.

“That he gave the people an opportunity to speak on some subjects does not mean that he didn’t know what to say. I am saying that it is his leadership style, a dynamic leadership style of team building.”

The APC-PCC spokesman explained that interpretation is personal and that people could interprete the action in their own way.

“If there is any Nigerian leader that is more media friendly, it is Bola Ahmed Tinubu. Your team has not demonstrated the required neutrality that would earn anybody the kind of confidence required to trust your judgement in Arise Television.

“A gentleman in your studio, Rufai Oseni said that what Bola Ahmed Tinubu did is nonsensical. How could you say that on the television and expect that we will respect your medium.

“You habour such vituperation against my principal and you say that he doesn’t have respect for you.

“I am saying that your conclusion on Bola Ahmed Tinubu is very biased, unacceptable and it’s not a reflection of the feelings of the Nigerian people. Therefore, nobody on the social media has criticised him. You could have the opposition like the PDP saying that he is a disgrace

“In my view, what he has done is innovative and I am proud of him. By my judgement, what he had done is correct, it’s not criminal or illegal. You don’t know that he has shown innovative leadership.

“He might be the first to do it, but leaders must build their team, showcase them and allow them to show their expertise.

“That is what we have done. Why did you not advise Chatham House to stop him. They are proud of him. When Asiwaju Bola Ahmed Tinubu speaks, some people turn it around. He is the candidate to beat and they are oppressed by his outstanding presentation,” he said

Ajiboye revealed that he had related with Bola Ahmed Tinubu very well and had spent hours talking to him on several topical issues.

He said that by any measure, Bola Ahmed Tinubu is not a dull human being, adding that he has articulate answer to every question.

“But again, he is intelligent to know when you have a biased mind against him, so he would avoid you. He said that he is a newsmaker and he determines where to go.

“He was on BBC, does that look like someone that cannot speak to the media. In Chatham House, he spoke about his birth, parentage and education and you still say that he avoided the media.

“He said that he is Tinubu and that if anybody had a doubt about that they should go and do DNA. Bola Tinubu is one person that the naysayers have exhausted every negative thing they want to say about him.

“He spoke for 28 minutes in Chatham House and enunciated his positions. He answered the questions respectfully and intelligently,” he said.