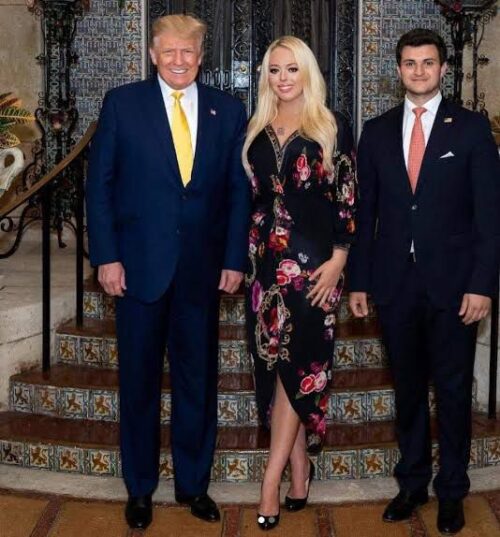 According to Page Six, a source close to the couple revealed they would be getting married on November 12.

The wedding ceremony, as gathered, will host more than 500 guests and is scheduled to hold at Trump’s palm beach in Florida.

The source also said the ceremony would be a “huge and lavish” one.

“There has been a lot of planning and a lot of staging. This is Tiffany’s big moment, and it will be lavish. It is going to be a huge and beautiful affair,” the source said.

Tiffany and her fiancé got engaged on January 19, 2021, at the White House rose garden, a few hours to the end of Trump’s tenure as US president, with Bolus popping the question to Tiffany with a 13-carat emerald-cut diamond from Dubai, said to be worth $1.2 million.

Boulos was raised in Lagos and he is of Lebanese and French descent. He was said to have moved to Nigeria at a young age – where his family’s business is based; he studied at the American International School of Lagos.

You’re spiritually blind for not seeing the danger ahead of Ifeanyi as Davido’s spiritual father, prophet ikuru blast Pastor Adegboyega

He is the son of Massad, the Chief Executive Officer of SCOA Nigeria, and his mother Sarah is the founder of the Society for the Performing Arts in Nigeria.

Page Six gathered that Bolus was studying project management at the City University of London when he met Tiffany, a law student at Georgetown, while she was on vacation in Mykonos, Greece, with Lindsay Lohan in 2018.

The couple currently live in Miami, just a short drive from Mar-a-Lago.