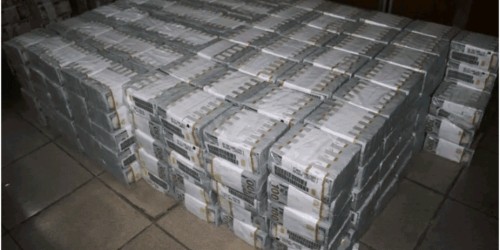 EFCC has arrested a currency speculator in Abuja and also recovered over $6 million from BDC operators.

It was gathered that the arrest was made known by the Commission on its official Twitter handle on Wednesday, November 16, 2022. The alleged currency speculator whose picture was released by the EFCC is also known as Mustapha Naira.

The commission noted that the arrest was made as part of their effort to sanitise the foreign exchange market, and all shades of economic sabotage.

The EFCC’s statement: According to the EFCC, Mustapha was arrested on Saturday in the Wuse area of Abuja.

“As part of its ongoing operation to sanitise the foreign exchange market and rid it of speculators and all shades of economic saboteurs, the EFCC has arrested one Mustapha Muhammed alias Muaspaha Naira.

“He was picked up by operatives of the commission on Saturday, November 12, 2022, at Wuse Zone 4, the hub of parallel market operations in the Federal Capital Territory.

“The suspect has made a useful statement while the investigation continues.”

In a related development, News One Nigeria reports that the EFCC said that some Bureau De Change operators who were recently arrested in Lagos, Abuja, and other parts of Nigeria were in possession of over $6 million.

The EFCC Chairman, Abdulrasheed Bawa, who made this known while speaking on the Nigerian Television Authority’s (NTA) said that the arrests were part of efforts of the anti-graft agency to sanitise the foreign exchange sector.

Speaking on “Sanitizing Ungoverned Operators in the Forex Sector” Bawa who was represented by the Commission’s Director of Operations, Abdulkarim Chukkol, said that the EFCC’s arrest of BDC operators and currency speculators in the parallel market was not indiscriminate but a product of intelligence.

The EFCC Chairman said that “At EFCC, we work with intelligence and with other stakeholders; and when we talk of illegal forex operators you cannot just invite people on the street even though sometimes you could, but generally you do not have a choice but to make an arrest.”

The EFCC Chairman noted that the commission did not only recover some of the monies but secured their forfeiture to the Nigerian government while the culprits were prosecuted.

Bawa also emphasized the need for active inter-agency and stakeholder’s collaboration, pointing out that many of the over 6,000 registered BDCs do not belong to the Association of Bureau De Change Operators of Nigeria and therefore out of the orbit of regulators.

The EFCC Chairman said that “The CBN guidelines are clear regarding returns by BDCs, but how many of them do this.”