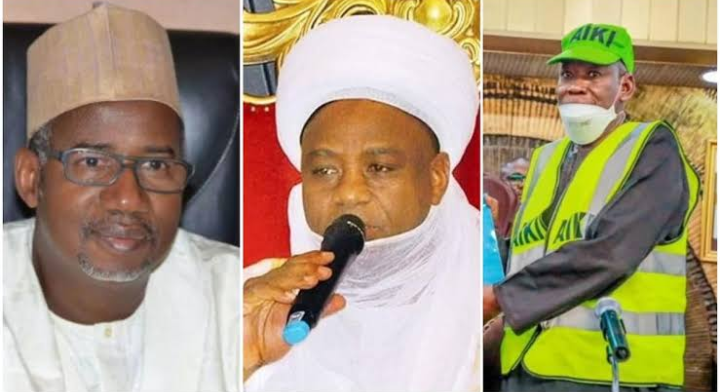 The Sultan of Sokoto, Alhaji Muhammad Sa’ad Abubakar III, has admonished Muslim faithful to adhere to the federal government’s protocols on social distancing, wearing masks and handwashing in order to stay safe.

This is in a clear contradiction to some Northern governors who have relaxed the lockdown restrictions for Muslims to celebrate the forthcoming Eid-el-Fitri.

The Sultan’s advice came on the day the Nigeria Centre for Disease Control (NCDC) confirmed 284 new cases, bringing the total figure to 6,677; 1,840 patients have been discharged while 200 have died.

Governors Abdullahi Ganduje (Kano), Mai Mala Buni (Yobe), Mohammad Abubakar (Jigawa), Babagana Zulum (Borno), Bala Mohammed (Bauchi) and Muhammad Yahaya (Gombe) had relaxed the restrictions imposed on their states to check the spread of the virus much against the strident advice of the federal government against the lifting of the ban on large congregations, including religious ones.

Muslims are marking the end of the Ramadan fasting tomorrow and would congregate at their Eid praying grounds on Saturday to commemorate religious rite.

But in a statement by the Deputy Secretary-General, Nigeria Supreme Council for Islamic Affairs (NSCIA), Professor Salisu Shehu, yesterday, the Sultan, who is also the spiritual leader of Muslims and the President-General of the council advised the faithful to adhere to the rules of whichever state they find themselves, saying even where lockdown is relaxed, they should tread with caution.

“As the month of Ramadan is gradually coming to an end and the Eid-ul-Fitr is approaching, it is crucial to reiterate that we are living in unusual times when almost everything normal has become abnormal, including social gatherings and large congregational prayers,” he said, adding:

“Therefore, Muslims are enjoined to note that Eid-ul-Fitr is not a compulsory religious activity (fard) and at no point should it be observed if doing so will undermine the fundamental purpose of Shari’ah: security, a multifaceted concept which includes personal, community, national, environmental and health components, among others.”

He added, “Muslims should, therefore, act according to the established protocol in their various communities and locations in Nigeria during the forthcoming Eid-ul-Fitr. In places where restrictions have been lifted from congregational prayers, Muslims should observe their Eid prayers while still taking necessary safety measures regarding personal hygiene, facial masks, and social distancing.

“It is even advisable that in such places, massive gatherings at one Eid ground in a big city should be avoided. Rather the Eid could be performed in area-Mosques to avoid unmanageable crowds.

“However, in places where the ban on large congregational prayers and socio-religious gatherings is still in force, Muslims are directed to be law-abiding while appreciating that intentions supersede actions and actions are judged on the basis of intentions, as Prophet Muhammad said.

“Muslims are advised to be law-abiding in all circumstances, while praying to Allah fervently in their various homes, if that is what the situation requires, to forgive our sins and heal the world from destructive and disruptive diseases like Coronavirus.

“Certainly, people all over the world at large and Nigeria, in particular, are under intense pressure and the sooner the pandemic is over, the better for us all.”