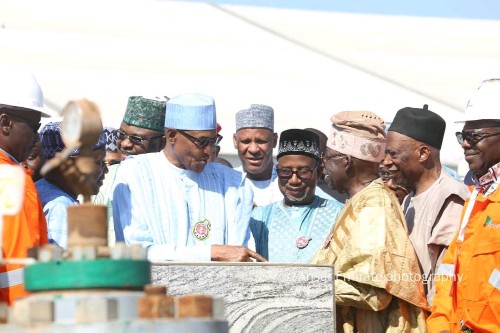 Bala Mohammed, governor of Bauchi and vice-chairman (north) of the Peoples Democratic Party (PDP) presidential campaign council, says everybody in his state is a supporter of President Muhammadu Buhari.

He said this on Tuesday at the groundbreaking ceremony to flag off the Kolmani Integrated Development Project (KIPRO), situated in the boundary of Bauchi and Gombe states.

Many Feared Dead, Several Others Injured As Gunman Opens Fire In Walmart, US Supermarket

Mohammed, who had recently threatened to leave the PDP presidential campaign over anti-party activities targeted at him, expressed his support for Buhari, a member of the All Progressives Congress (APC), at the Tuesday event.

He also made what appeared to be a joke about the crisis in the PDP by acknowledging the “G5 and the G1″, adding that the people of Bauchi state are grateful for the support of the president.

“Mr President, this project is going to be one of your most important legacies. It will not only assist the country in generating more revenue, it will also create jobs, fight poverty and also bring national integration,” he said.

“We thank you most sincerely. We are deeply indebted to you. Bauchi state [is] your own. You know this is a state that everybody is a Buharist.”