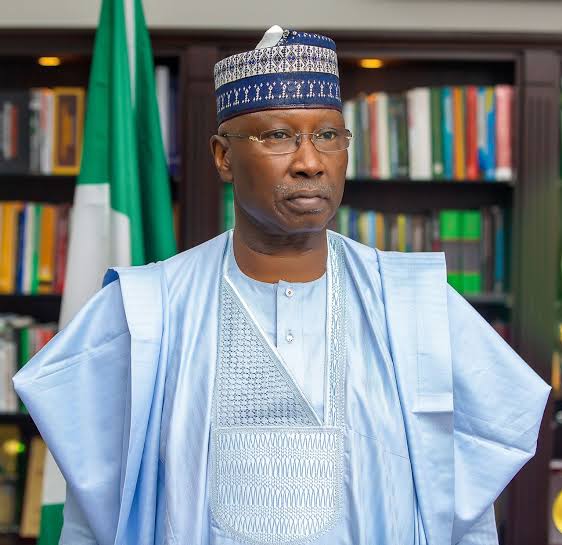 For Running Mate, Tinubu, Look No Further by Solape Akin-Williams

It wasn’t for the fun of it that the Secretary to the Government of the Federation (SGF), Boss Mustapha, is called the stabilizer, amongst top government functionaries. It was in recognition of his deft political experience and administrative skills, to ensuring that structures are consciously put in place, and allowing process to take its course on every occasion.

Although for reasons that some thought was tenable and politically expedient, the former handlers of the presidency were generally considered high-handed, and rather than create a friendly administration, even for insiders to have a sense of belonging, the stories from the corridor of power were not as palatable as many would have desired.

Unfortunately, life happened and Mustapha, by providence, began to handle all manners of assignments for his principal, the president, and by extension, became the unofficial manager of the presidency, an assignment he has so far discharged to the awe of even the enemies of the government and the opposition alike.

Therefore, for a man, who understands the presidency and the office of the president so well, the candidate of the All Progressives Congress (APC), Asiwaju Bola Tinubu, needs not look further in picking that suitable ally with whom he would run the government and make real change to happen.

Interestingly, the two men come from sound political backgrounds and their trajectory had shared space from time to time, in the onerous task of actualising the Nigerian dream.

A Christian northerner with requisite education and exposure, complemented by very expensive contacts, Mustapha, an enviable family man, comes highly recommended as the ideal pair to sell the APC joint ticket, if the ruling party must leave Nigeria in completely safe hands.

The SGF ventured into politics in the 1980s after his graduation from the law school. And between 1988 and 1989, he was already a member of the Constituent Assembly, the body that drafted the Constitution of the Third Republic, which further came handy as the nation progressed in her political and democratic sojourn.

In 1989, he was the Chairman of the Peoples Solidarity Party (PSP) in defunct Gongola State. Sadly, the party fell on the sword of the military junta at the time and was among the political parties disbanded by then Military President, General Ibrahim Babangida.

As life went on, Mustapha, between 1990 and 1991, became the chairman of Adamawa State wing of the Social Democratic Party (SDP), one of the two political parties created by the Babangida regime. He contested for Adamawa State governorship in 1991 as the SDP candidate, but lost to the National Republican Convention (NRC) candidate, Abubakar Saleh Michika.

Mustapha was a member of the presidential committee set up by former President Olusegun Obasanjo in 2000, to investigate the activities of the Petroleum Trust Fund (PTF), under General Muhammadu Buhari, after he had earlier resigned his position as Executive Chairman of the agency.

The Interim Management Committee, however, did its work but the report was never made public.

As he progressed in life, Mustapha served as the Deputy Director-General to the presidential campaign of then Vice-President Atiku Abubakar, during the 2007 presidential election.

As the Deputy National Chairman of the Action Congress of Nigeria (ACN), the party that was among the three major ones, fused into the APC at the February 6, 2013 merger, ahead of the 2015 general election, Mustapha was instrumental at different stages, especially, in the area of strategy, to the formation of the ruling party, until victory was assured in the 2015 elections.

He later served on the presidential campaigns and was among the members of the transition committee in the 2015 election that, brought Buhari into power. He is also a member of the board of trustees of the party and at some point, headed the Inland Water Ways, after Buhari had become president.

Without a doubt, Mustapha, has all it takes to be Nigeria’s vice-president, particularly, given his personae, maturity, experience, name recognition and carriage, for the office of the number two citizen. He understands the literature of high wire politics, including its rudimentary nuances, and knows as much, the processes in government.

Let’s think about it, there couldn’t have been a better match for Mustapha amongst the lot. He is the right man for the job. And curiously, Tinubu knows as much – that Mustapha is dependable, trustworthy and hardworking. What more, a South West/North East pairing is a winning balance any day, any time.