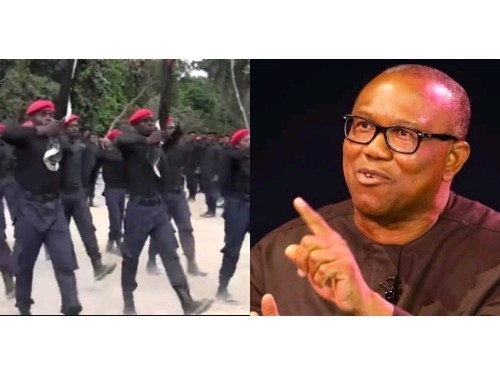 Peter Obi, presidential candidate of the Labour Party (LP), says he can’t condemn the Eastern Security Network (ESN) because he is unsure of their activities.

Speaking on Monday at ‘The Candidates’, a presidential town hall series, the former governor of Anambra said agitations in parts of the country is a result of leadership failure.

He said if elected president, his administration will adopt dialogue to address the issue.

“The first of our seven-point agenda is to ensure the security of the lives and properties of Nigerians, and to show a united and one Nigeria by ensuring that there is equity, justice, and doing things following rule of law,” he said.

Obi Is No Threat To APC, One Kano LG Gives Us More Votes Than South-East — Ganduje

“Everywhere in the country is full of agitation. It is the effect of leadership failure. There is nothing wrong with agitation. You dialogue and discuss with everybody.

“I can’t condemn ESN because I’m not sure who is doing what. You can only condemn people when there is a process in which they have said this person has done something.”

Meanwhile, at an interactive session organised by Arewa Joint Committee in Kaduna in October, Obi had claimed that ESN was formed by governors in the south-east – an assertion that TheCable proved to be false.

The setup of the ESN was announced by Nnamdi Kanu, leader of the proscribed Indigenous People of Biafra (IPOB), in December 2020.

On December 13, 2020, Kanu announced the launch of the security outfit, adding that its primary responsibility is to protect the south-east from terrorists and other criminal elements.