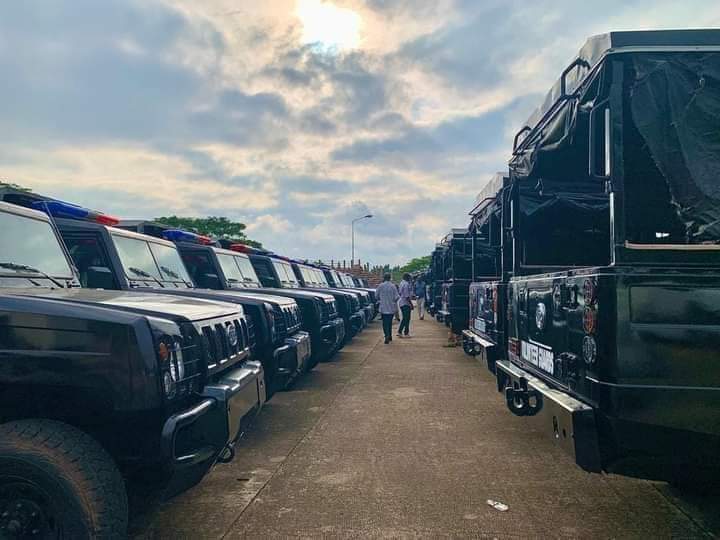 Cornel Osigwe, the corporate communications manager of Innoson said the governor had purchased the vehicles which was unveiled last week Thursday, for the state’s security outfit known as Community Volunteer Guards.

The governor during the unveiling had also pledged that his administration would legally procure AK-47, AK-49 and other sophisticated weapons for the group.

He said that 500 personnel drawn from the 23 local government areas of the state were recruited in the first batch.

Ortom said that his administration decided to constitute the security outfit due to the failure of federal government to disarm the fulani terrorists.

Ortom said, “Benue State has been especially targeted because of the historic episode of 1804, but also because my administration’s insistence on the Rule of Law rather than rule of terror and for always standing with my people in their refusal to surrender their land, identity and Judeo-Christian faith and values to the Islamization agenda.

“Given the fact that the Federal Government has consistently failed to disarm the Fulani terrorists who have continued to maim and kill our people at will, the State Government is going to apply for a License to legally procure AK47, AK49 and other sophisticated weapons for the Benue State Volunteers Guards to enable them tackle these murderous terrorists effectively.

“To do this effectively, the Benue State Government had approved a two-week capacity building programme for Five Hundred (500) personnel of the Community Volunteer Guards to learn some basic paramilitary aspects. The training which began on 29th June, 2022 with five hundred (500) participants drawn from the 23 Local Government Areas and the three Senatorial Districts ended on 12th July, 2022.

“A date for the Batch 2 would also be announced as soon as possible.”

Osigwe said that among the security apparatus that followed the unveiling is the display of newly acquired Innoson Vehicles, specifically the Innoson MSII.

“Innoson Vehicles appreciates the constant patronage of His Excellency Samuel Ortom who under his administration has purchased over 600 varieties of Innoson Vehicles.

“Innoson Vehicles will continue to give support services to various car servicing centers that Partner with it to service the brand of the Innoson vehicle”.

No matter the challenges, Innoson Vehicles will continue to wax stronger till it becomes one of the leading vehicle manufacturing brands in the world automobile market.