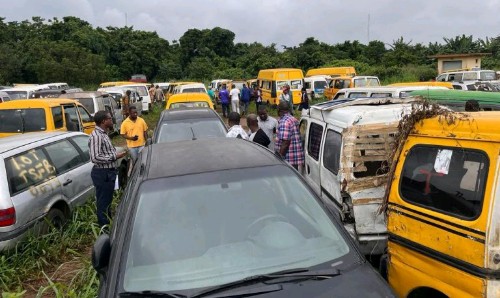 The Senior Special Assistant to Governor Babajide Sanwo-Olu of Lagos State on New Media, Jubril Gawat, has justified the auctioning of 134 vehicles impounded for several traffic offences by the state government on Thursday.

The exercise generated a lot of reactions, especially on social media after videos from the venue of the auctioning showed some of the vehicle owners wailing while their vehicles were being auctioned, with many viewing the government’s action as being harsh.

Explaining reasons behind the action on Friday in a post in a Twitter thread titled “FACTS about the Lagos State Auction Process that happened yesterday,” Gawat said the exercise was totally in line with the provisions of the Lagos State laws.

According to him, some of the vehicles were seized for offences that attract only fines but the owners abandoned them, leaving no other option to the government than to auction them. He also confirmed that after the successful auctioning of 134 vehicles, the enforcement will continue.

“The role of Lagos State Taskforce is to carry out enforcement exercise which is confiscation of vehicles for traffic offenses, and handing them over to the MOBILE COURT (with evidence) for Judgement.

“Some of the cars being auctioned here were confiscated Not for ONE WAY Alone, there are other offices that attracts just a fine but some people run away from the Court Process, that’s why they have been forfeited to the State Government after the stipulated period (BY LAW).

“The Coordinator of The Lagos State Special Offenses Mobile Court was present at the Auction venue, she says exercise is seemless and well organised and also disclosed that all 134 vehicles on display had gone through due process of the COURT OF LAW before being forfeited.

“Taskforce says auction exercise is to desist the public from committing crime or traffic offences as no one would be spared if found wanting. He says he hopes that this exercise would serve as a dettrent to other road users who are fond of driving against traffic.