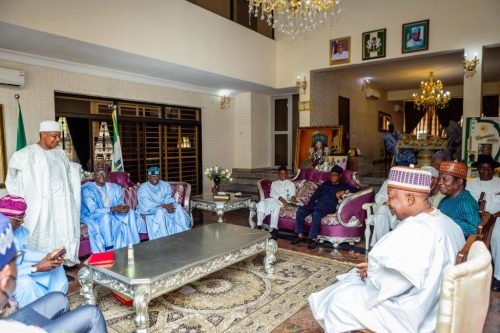 The National Leader of the All Progressives Congress, APC, has summoned an urgent meeting with Governors on the Platform of the party.

Tinubu’s move is coming shortly after Vice President, Yemi Osinbajo declared to run for President in 2023.

Earlier reported that Osinbajo met with APC governors on Sunday night in Abuja before declaring today. Only about 10 of the APC governors honored the invitation and according to sources, the attendees led by Governor Abubakar Atiku Bagudu of Kebbi State were non-committal to the aspiration of the Vice President and reportedly told him their only interest was seeing the APC as governing party beyond 2023.

He told them of his plans to contest for the presidential ticket of the APC in what will be a direct challenge against Tinubu who declared for the same position weeks ago.

This morning’s meeting has been scheduled to begin at 10 a.m Monday at the Kebbi house on Plot 70, Kur Mohammed Way, Off Ahmadu Bello Way, Central Business District, Abuja.

Suggested Read: We Do Not Know of Any Arrests Of Bandits – Kaduna Govt