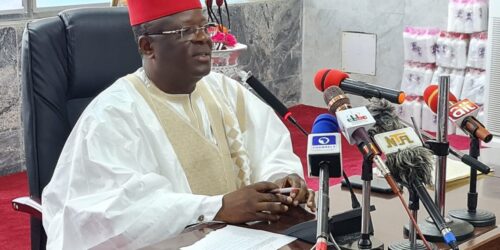 The Ebonyi State Government has directed all security agencies in the state, including Ebubeagu Security Network, to kill any miscreant found with a gun or dangerous weapon in the state.

The Commissioner for Information in Ebonyi State, Uchenna Orji, disclosed this in a statement on Monday.

It was gathered that the decision of the state government was in response to reported security tension in Abakiliki, the state capital, on Monday, following sporadic gunshots in the area.

Gunmen were said to have invaded the area and disrupted commercial activities, forcing residents to scamper for safety.

The attackers were said to be enforcing a- five-day controversial sit-at-home declared by a faction of the outlawed Indigenous People of Biafra (IPOB).

An unspecified number of residents were reportedly killed by the gunmen during the attack in the state.

But Mr. Orji refuted the report, stressing that there was no killing of any resident in any part of the state and that the purported sit-at-home did not happen in the state.

The commissioner said those peddling “the rumor” of sit-at-home enforcement were “enemies of the state fanned by opposition forces” with the intent to scare residents of the state.

Mr. Orji said Governor Dave Umahi of Ebonyi State has also directed security agencies in the state as well as members of the Ebubeagu Security Network to constantly patrol the capital city and various council areas in the state.

“The state reiterates its unflinching commitment to the security of lives and properties of the inhabitants of the state and therefore directed all security agencies and Ebubeagu Security Outfit to neutralize any miscreant found with a gun and or dangerous weapon in the state,” he stated.

The information commissioner asked residents of the state to disregard the rumored sit-at-home and go about their normal businesses without fear.

Background
Simon Ekpa, a controversial Biafra agitator and leader of the pro-Biafran group, Autopilot IPOB, a faction of the IPOB, had declared a five-day sit-at-home across Nigeria’s south-east to be observed from 9 to 14 December.

Mr. Ekpa, who made the declaration on Wednesday via his verified Twitter handle, claimed that the sit-at-home order was in response to some “proactive measures” being put in place by unnamed Biafran agitators to address the rising insecurity in the region, which according to him, was caused by the Nigerian government.

He warned residents of the region to stay indoors throughout the five days or have themselves to blame if they disobey the order.

Shortly after his declaration, a video clip, which showed a rifle leaning on a tree in a thick forest, surfaced online.

In the clip, shared on various WhatsApp groups, a voice was heard ordering residents of the region to observe the five-day sit-at-home.

“Stay in your house. If you come out, you will die. Mark my word,” the voice said.

But several Igbo leaders condemned the declaration and urged residents of the region to disregard the order.

Nnamdi Kanu, leader of the IPOB, repeatedly disowned the declaration and asked residents of the region to ignore it.

Some residents have been attacked for stepping out of their homes during the ongoing five-day sit-at-home order by gunmen enforcing it.

Again, on Saturday, the hoodlums attacked residents in different locations in Enugu State, killing two persons in a local market and razing a police vehicle.