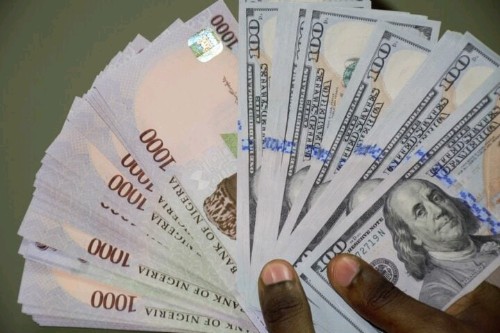 The naira has sustained its momentum at the parallel market, appreciating N710 per dollar in Lagos on Friday.

The development represents N115 or 13.9 percent gain compared to the N825 to a dollar it traded on Wednesday.

According to TheCable, the Bureaux De Change operators (BDCs) in the Ikeja area of Lagos said the buying rate of the greenback at N700 and the selling price at N710 per dollar, leaving a N10 profit margin.

The traders said there was moderation in demand for dollars by citizens.

“I have plenty of dollars in my hand but people are not buying as much as before. I have not yet sold anything today,” Abubakar, a trader at the Alade Market, Ikeja, said.

A currency trader at Victoria Island, simply identified as Musa, said he is currently buying the local currency at N700/$ and selling it for N740 per dollar on Friday morning.

He said he and some of his colleagues were recording losses because they had bought the dollar at about N800 but now have no choice but to sell for a lower amount.

“I am losing some money too but I am not selling anymore till it goes back up. They (other currency dealers) will keep and sell when it goes up,” Musa told TheCable.

He also attributed the appreciation of the naira against the dollar to a rumour that any US dollar bill issued before 2022 would not be acceptable by January 2023.

Findings have revealed that the claim is false. TheCable’s fact check debunking the rumour can be found here.

“Even though the news is fake, how many people will you tell? They just believe that you want to take their money,” Musa said.

Last week, the naira weakened to almost N900 per dollar, pressured by the planned currency redesign by the Central Bank of Nigeria (CBN) and the subsequent Economic and Financial Crimes Commission (EFCC) clampdown on FX dealers.

At the official market, the local currency depreciated 0.10 percent against the dollar to close at N446.10 on Thursday, according to FMDQ OTC Securities Exchange, a platform that oversees foreign-exchange trading in Nigeria.

Aminu Gwadabe, president of the Association of Bureaux De Change Operators of Nigeria (ABCON), said people have realised that using the dollar as the preferred currency to store money is no longer the best option.

“People were eager to buy dollars and keep them even though they don’t need them to pay school fees or anything. But now, they have burnt their fingers because the exchange rate is not stable,” Gwadabe said.

“Hoarding dollars is not a good thing to do. As a licensed dealer, you are not supposed to engage in hoarding. You buy, then you sell immediately.

“There is also a lot of surveillance within the system. When people buy dollars from BDCs, the traders have to take the naira to the bank and answer a lot of questions. So, the traders are being cautious.”

He further advised the Central Bank of Nigeria (CBN) to make efforts to close the gap between the official and parallel market exchange rates.

“CBN can inject liquidity to meet legitimate demand for forex. They can also revisit the policy of suspension of FX sales to BDCs. It would go a long way to boosting the value of the local currency,” the ABCON boss explained.