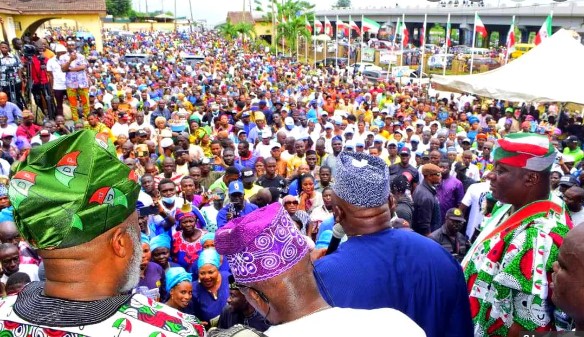 The Peoples Democratic Party (PDP) has received new members from the All Progressives Congress (APC), African Democratic Congress (ADC) and Allied People’s Movement (APM) in Ogun State.
Naija News learnt that the politicians, who came out from different political parties, are reportedly over 10,000.

They pledged their allegiance to PDP on Friday, August 26, 2022.

Amongst the defectors were also members of the Labor Party (LP), Peoples Redemption Party (PRP), and Social Democratic Party (SDP).

Reports said the new members have since declared their support for the governorship candidate of PDP, Hon. Ladi Adebutu.

The decampees, Applesbite learnt, were led into the party by former Deputy Speaker of the state House of Assembly, Hon. Tola Banjo from Amosun’s group; Saka Ahmed from Osoba group and Yinka Asaye from Abiodun’s group.

The chairman of PDP, Hon. Sikirulai Ogundele and other leaders of the party in the state reportedly received the decampees in funfair and jubilation at the party secretariat in Abeokuta, Ogun state capital on Friday.

Other decampees include the governorship candidate of LP in the 2019 election, Modupe Sanyaolu and former councillors under the Amosun – led administration between 2016 – 2019.

Handling over the party’s flag to the decampees, the party chairman described the gale of defections as symbolic, historical and a partnership that would take PDP to Oke Mosan in 2023.

On his part, Adebutu lamented the spate of insecurity, unemployment, kidnappings, bad roads, and lack of quality healthcare services in the state.

He described the Abiodun-led administration as a failed government and called on the people of the state to vote him out in 2023.

The governorship candidate urged aggrieved members of the APC and other members of the opposition parties to join the PDP in defeating APC in the next election.

He assured the decampees of fairness, saying “everyone has equal rights in this party and our Permanent Voters Card (PVC) is our way to freedom”.

He said: “We all know that all is not well with governance in Ogun state. Don’t be deceived by this government, we are going to give them the Osun treatment”.

In his remarks, the deputy governorship candidate of the party, Hon. Abdulkadir Akinlade said PDP will not only defeat APC in 2023, but also send the party into early retirement.

Akinlade said, “there is a lot happening now across the state, what is happening is what they call transfer window in the EPL, but don’t be bothered by their (APC) moves, they are only recruiting expired politicians into their party.

“We are not going to struggle with them (APC), we are going to beat them and ensure that we relegate them come 2023.”