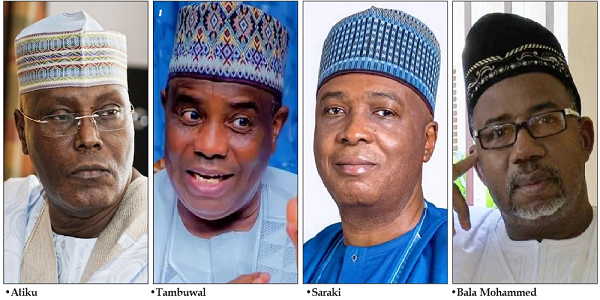 A fresh horse trading is gathering steam in the Peoples Democratic Party (PDP) as Northern gladiators in the forthcoming presidential primaries criss-cross the country for support.

Atiku is regarded as the likely biggest beneficiary of the latest horse trading.
He is projected to vie for the PDP presidential ticket with aspirants from the South if the negotiation terms are acceptable to the other Northern aspirants.

Some political heavyweights, according to party sources, have facilitated talks and under the table agreement between Atiku and some of his co-aspirants. 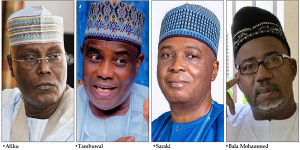 It was gathered that the fresh talks or negotiations followed the collapse of the consensus option mooted by some Northern elders, led by Prof. Ango Abdullahi.
It was learnt that the talks may have encouraged Bala Mohammed to seek a second term ticket as governor.

The deal may also earn Tambuwal the Senate Presidency should Atiku win the 2023 presidential election.

Saraki is tipped as possible Chief of Staff although some of those conversant with the deal have reservations because he might be too powerful in that position.

It was gathered that a return to the Senate was considered as “politically low” for Saraki.
While some suggested a ministerial appointment for Saraki, others said he would prefer ceding such to any of his political mentees.

For Mohammed Hayatu-Deen, it was proposed that he could be a minister and then a gubernatorial candidate in 2027.

A top source, who spoke in confidence, said: “From the horse trading so far, I think it is only Bala who appears amenable because of his commitment to the PDP regaining power at the centre in 2023.

“You know, he has a second term gubernatorial window to fall back on.

“It is not clear if the new deal, being brokered by some powers that be, will be acceptable to Tambuwal, Saraki and Hayatudeen.

“Left to Tambuwal, it is either being a President or a Vice President. In politics, however, the dynamics keep changing. The changes will persist till the end of the presidential primaries.

“So far, the general feeling is that the North should present a common candidate against other aspirants from the South.”

Sources said if Atiku gets the PDP ticket, he will be looking in the direction of the South-East or the South-South for his running mate.

“The permutations are tilting towards either Obi or the Governor of Delta State, Ifeanyi Arthur Okowa, depending on the prospect of huge votes because of APC and its incumbent factor,” a source said.

“Both the South-East and South-South are traditional PDP enclaves. But we need to be careful and sensitive to the agitations of the South-East, especially the secessionist bid the nation has been trying to curtail.”