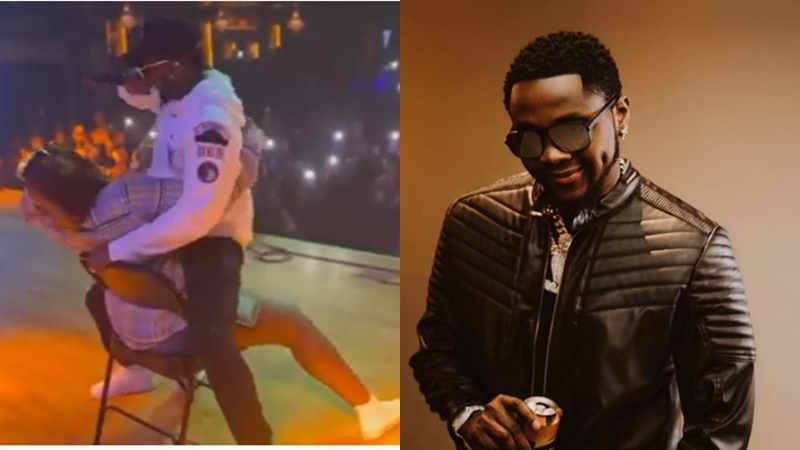 Popular Afrobeats superstar, Kizz Daniel has taken his onstage performance an inch higher after going ‘wild’ with a female fan during a recent show.
Applesbite understands that the talented singer went intimate with an endowed female fan while performing at a recent concert in Sidney, Australia.

The video sighted online captured the singer grinding an endowed female fan on stage before a cheering crowd.

The musician while singing, moved closer to the female fan, watched her shake her backside vigorously before positioning her waist to grind her, eliciting cheers from excited fans.

Kizz Daniel, then went back to the stage to thrill his fans with some of his hit songs.

How Nigerians Reacted
kogiblood wrote: ‘Nah why I know dey go show because if I carry my babe and celebrity do this that show go end with fight that they.’

MarisOwie wrote: ‘People wey they marry celebs they try though lol. If na my bf/ husband all my face for dn swell up oh.’

Chiagozie wrote: ‘Why is this man publicly cheating on me?? He told me he won’t do this on stage again.’

‘Even if he’s been sex-starved, Get a room abeg,’ Coco wrote.

Jay wrote: ‘’Entertainers won’t learn,never full flex with someone you don’t know there age or history(Akon is a typical example to learn off),if not for wisdom he wouldn’t have whatever he has left when he ran back to Africa.’’