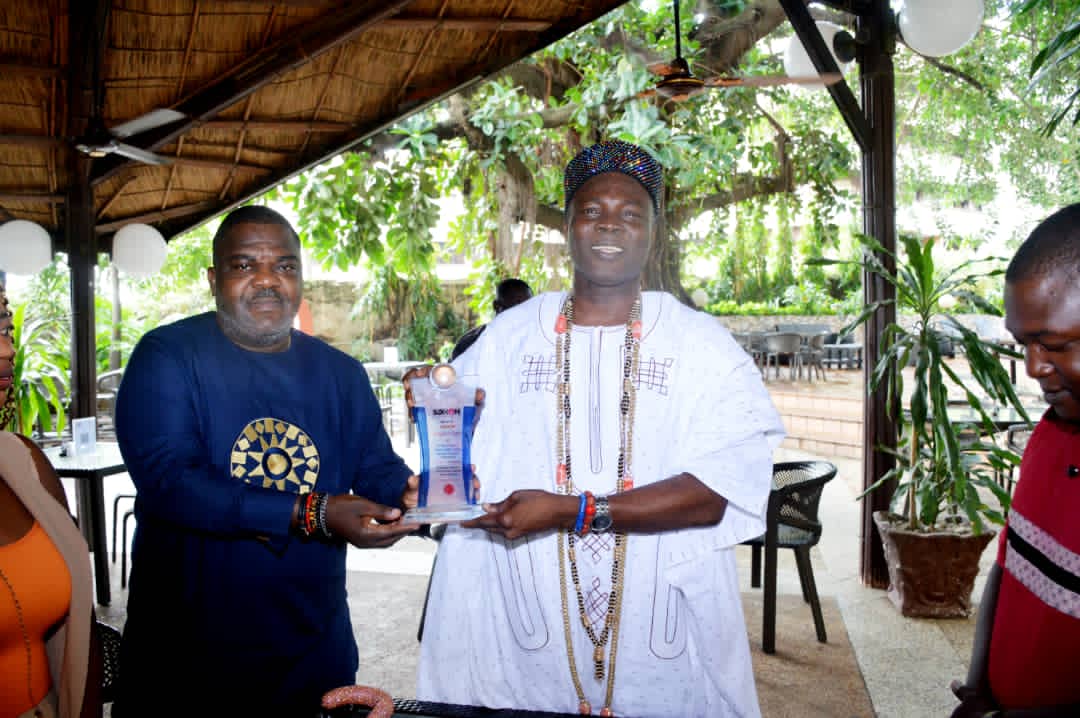 Members of the Society of Digital Newspaper Owners of Nigeria, SDNON, on Thursday, September 16, presented a special recognition award to Olowu of Kuta Kingdom, His Royal Majesty, Oba Hammed Adekunle Makama Oyelude (Tegbosun III), over his contributions to culture and tradition development in Osun State and Yorubaland generally during a visit.

President of SDNON, Otunba Femi Davies, during the presentation of award to the monarch, disclosed that Oba Oyelude was a genuine leader with the interest of his people at heart.

“I have known Kabiesi for years; from his days in politics and can say for a fact that he is a selfless, compassionate and true leader. Kabiesi is one of the very few Nigerian monarchs who constantly hold stances on national issues particularly in the area of security and national unity.

“Kabiesi is one of the few revered monarchs who held a contrary stance when Yoruba Nation ideologists held sway recently. He is a believer in an indivisible Nigeria, however, a staunch advocate of true federalism.”

Speaking further on the value of having an indivisible country, Otunba Davies noted that proponents of a divided Nigeria were mostly in it for personal gains and followers were comprised of people totally ignorant of why they were fighting the course.

In his appreciation speech, Oba Oyelude applauded the leadership of SDNON for considering him worthy of a visit, recognition and partnership in nation building.

The monarch, who is a huge supporter of the Nigerian Army, hinted that he was once commended by former Chief of Army Staff, Major General Tukur Butatai (Retd); and this resulted in a major infrastructural development in his community.

He said, “I have chosen my path to nation building. Anyone abreast with activities from the palace of Olowu Kuta knows if I am not talking about tradition, I am talking about security.

“Over the past nine years, seven months that I have been opportunned to be the Olowu of Kuta, there have been some legacy projects and landmark achievements to our credit, like never before.

“In the history of Kuta, they’ve never had a younger person on the throne until my emergence. We have four ruling houses.
With these achievements, the elders have come to trust our generation even more. I have chosen to be a catalyst of change rather than a vanguard of destruction.

“As monarchs, all of us have just three responsibilities. We are saddled with maintenance of peace, culture and tradition. Kings are not religious leaders. Our responsibility as handed over to us in our certificates is to be custodians of the legacies of our ancestors, so it does not go extinct.

“There has been an agitation dating over a century for a major road to connect Ede and Kuta. The two communities are separated by Osun river. Those ahead of me tried to get the attention of the Federal Government both during military rule and successive civilian administrations to deliver the road but failed.

“In the middle of a conversation, one day in Abuja, former Chief of Army Staff, Major General Tukur Butatai, thanked me for my support for the Nigerian Army and asked what patronage I wanted from the Army.

“I told him, I have only one request. I gave him a brief history of the river and how significant it is to my people. Immediately, Major General Butatai asked me to make the request official, by the next day, he minuted ‘approval to construct’, and soldiers were deployed to Kuta to evaluate and cost the site of the river while I was still in Abuja.

“From the day they came for estimation, the army erected their tent in my town until the project was delivered. Buratai did it for my community free of charge, and came to commission it himself. We then dubbed him a jinx breaker.”