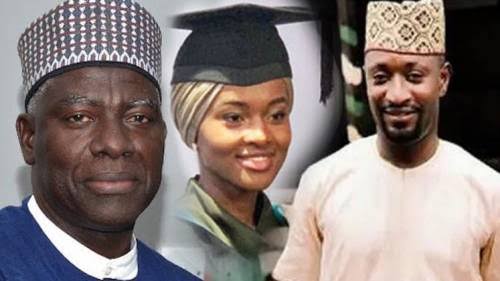 A Federal High Court in Asaba has struck out its application by the State Security Service, SSS, seeking to stop the payment of N10 million judgement debt against it in a case involving Hanan Buhari, President’s daughter.

The case involved a citizen, Anthony Okolie, whose fundamental human rights were violated over an MTN SIM card that was once used by Hanan.

SSS had filed an appeal on Tuesday, July 8 and is also seeking to obtain a stay-of-execution order to bar Mr Okolie from enforcing the payment of the judgement sum until the appeal is determined.

However, on Wednesday when the matter came up, Justice Nnamdi Dimgba struck out the SSS application saying the Federal High Court lacks the jurisdiction to entertain the case.

Apple's Bite had earlier reported that Justice Dimgba of the Federal High Court in Asaba had ordered the SSS to pay the sum of 10,000,000 naira to Mr Okolie who was illegally detained for 10 weeks without a court order for possession of a SIM card he had bought, however, previously used by President Buhari's daughter Hanan.

The court said the action by the security agents was unlawful.

Some weeks after the judgement, Mr Okolie’s lawyer commenced the process of recovering the judgement debt from the service and also threatened to institute contempt proceedings against the director general of the SSS for non-payment.

There is no date yet for the commencement of the appeal.

Next Read: VP Osinbajo Dissociates Self From Alleged Claims Linking Him With The Over 39 Billion Graft For Which Magu is Investigated