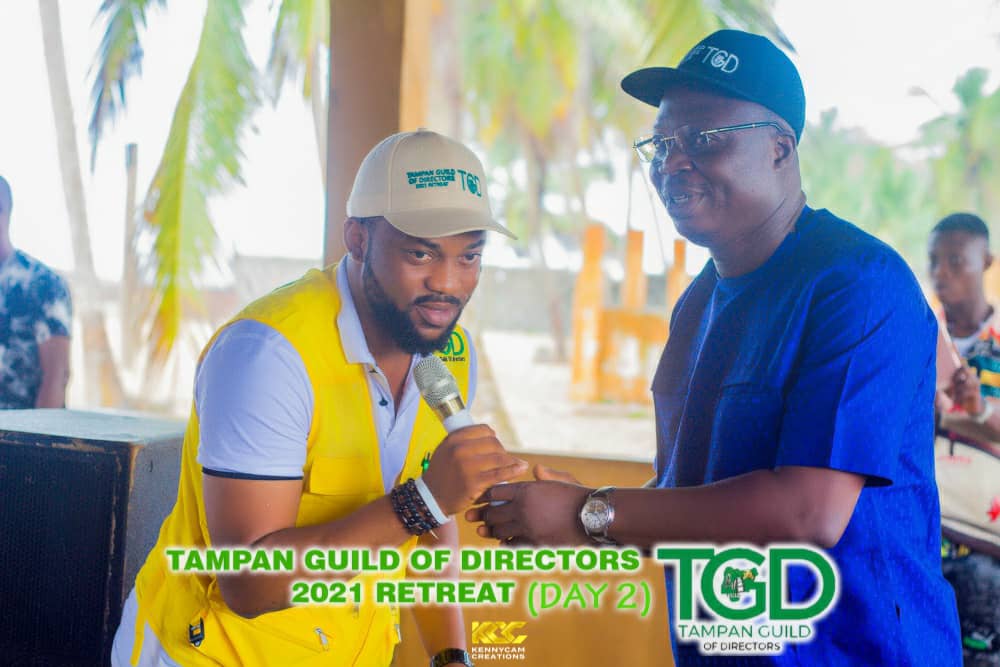 The leadership of Theater Arts and Motion Pictures Practitioners of Nigeria, TAMPAN, led by Otunba Bolaji Amusan (Mr Latin), the spirited global president of the association, constantly coasts uncharted waters, with inventive initiatives and programs; firstly, to help practitioners, who are members of the association become attune with up-to-the-minute techniques of filmmaking, and secondly, to give the association a face-lift in the eyes of the public, such that its members are seen as the thoroughbred professionals, which they are.

According to Olatunji, the pioneer chairman of TGD, the essence of the retreat was to restructure the minds of directors, rebrand their crafts and reposition them to sit among the elitist filmmakers across the globe. The retreat is conceived to serves as a bridge, between where we are, and where we aspire to be.

To state that the three days retreat availed these indigenous filmmakers of Yoruba extraction an opportunity to network, will be stating the obvious, as like-minded filmmakers drawn from the United Kingdom, United States of America and the host nation, Nigeria, all converged, to seek knowledge to improve their craft.

The facilitators reiterated the necessity for quality research and adequate knowledge acquisition, which is a requisite to excellent storytelling. Participants at the event were also shown alternative platforms to showcase their film products.

Others are Mrs Foluke Daramola Salako, who was also chairperson for the retreat planning committee, Princess Kemi Egbeyode, of Rollicking Entertainment Company, the project and event manager for the retreat, Wale Ilebiyi Snr, Ogundimu Anthony, Okiki Afolayan, Tola Bolaji among others.

TGD Chairman Emperor Olatunji, during the retreat, hinted that a GALA/Award Night, will be held later in October, at the prestigious Marriott Hotel, Ikeja, Lagos.

“Through TGD, our plan is to change the narrative of indegenous filmmaking in Nigeria, and the world over.

“During our tenure, we have planned strategic initiatives that will take our members to greater heights, one of such is this retreat we’re currently having, I’m sure everyone can attest to how impactful this retreat has been so far.

“Later in October, we shall have a GALA/ Award night organized by The Guild (TGD), at Marriott Hotel, Ikeja; and plans are already on with that too.

“We are using this medium to call for sponsorship for the event, Nollywood is a profitable Industry to do business with, the Yoruba movie Industry is very viable.

“Let your brands identify with us,” Olatunji Submitted.

The retreat was supported by Primero Transport Services and Nigerian Breweries plc.