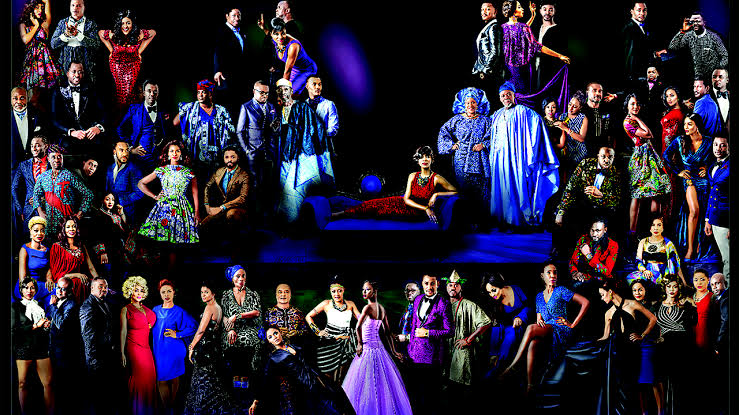 Sometime in April, Chairman of Wale Adenuga Productions and one of the most enduring entrepreneurs in Nigeria’s film/television industry, Mr. Wale Adenuga spoke about the level of disunity in the industry.

He told reporters that this was one of the reasons most practitioners are unable to attain their potential.

Adenuga said amongst other things that: “I am persuaded to believe that our inability to come together under an umbrella is one of the reasons we have some of the problems that undermine the growth of the Nigerian film sector.”

Although some practitioners disagreed with him at that moment, truth is that thirty years after the resurgence of the motion picture business in Nigeria via the video format, sectional divisions based on all forms of primordia and selfish interests continue to limit the industry’s prospects.

Even though efforts had been made at some point to organize into professional guilds and associations, Nollywood as the industry is called, is still undermined by a variety of splinter groups which make unity impossible and cast practitioners as an unserious lot before government, itself is unserious, even unsure about that prospect the industry bears.

If anyone was in doubt as to the accuracy of Adenuga’s observation, the furuore over the membership of the committee recently set up to advice the Federal Government of Nigeria on the impact of Covid-19 on the creative industry should tell a lot.

The committee comprising accomplished individuals from parts of the creative sector is under the chairmanship of renowned comedian and actor, Atunyota Alleluya Akpobome, professionally known as Ali Baba. It has Anita Eboigbe of the News Agency of Nigeria, NAN as Secretary.

The committee is billed to also include representatives of the fashion, publishing, photography, hospitality and travel sectors. It is to assess the expected impact of the pandemic on the industry in general, advise government on how to mitigate job and revenue losses in the sector and create succor for small businesses in the industry.

The Agitation of Nollywood Hierarchy

Since May 8, when the committee was named by Minister of Information and Culture, Alhaji Lai Mohammed, stakeholders, especially within the Nollywood subsector have raised questions about the integrity of the process of appointment. Some film practitioners including heads of association, guild, and other allied bodies have raised objections to the constitution of the body.

Speaking with Apple’s Bite International Magazine, former President of Association of Movie Producers (AMP), Mr. Zik Zulu Okafor posited that although the Federal Government’s plan is mitigate the effect of Covid-19 on the industry is timely and thoughtful, the process through which members of the committee emerged was faulty.
He explained: “My position, like that of others in the industry is simple, this is a fantastic move by the Federal Government.

This administration has taken some commendable actions with the industry’s benefits in focus. I uphold that members of the committee are qualified to speak for and represent the industry, but my grouse is with the process through which these people were selected.”

Toeing the same line of reasoning, President of Theatre Arts and Motion Pictures Association of Nigeria, Mr. Bolaji Amusan conceded that everyone on the committee is eminently qualified, he however explained that TAMPAN, like other guilds and associations feels maligned that people were handpicked without consultations with professional groups.

“We are not in doubt that everyone on the committee would deliver. As a matter of fact, they are eminently qualified to be in the committee. Our agitation is that the federal government was unfair to Nollywood to have handpicked certain individuals, when there is a structure, they could reach us through to send representatives for the committee,” Amusan posited.

President of Association of Movie Producers, Ralph Nwadike expressed similar sentiments in a social media post tracked by this tabloid.

Contrary to suggestions that Nollywood lack a structure to properly channel its views, he posited that the industry actually does forge a common front around issues of interest.

Said Nwadike in the post: “Nollywood is very well structured and each guild or association is formed with a democratic set up and our purpose is to have a common front with various working units under an umbrella body. We are a community of filmmakers and the only way to reach any community is through their various leaders. The people so selected are our family members friends and colleagues, it is not a personal fight against anyone of them. Our complain is for the government or their advisers to stop pretending Nollywood isn’t known to them.

If they say they don’t know us, we know ourselves and the late MKO Abiola once said you can’t shave a man’s head behind him. If you want to deal with a family, you go through the head of that family and not his extended family members.

That is the crux of the matter,”
Another celebrated film and television producer who does not want to be named expressed the opinion that those who made the committee appointment were practitioners who are closest to the government of the day and as such, the appointment was “politically induced.”

Those Who Hold Contrary views

Some practitioners are however displeased with these seeming divisive arguments insisting that they portray Nollywood practitioners as power mongers who cannot put the larger interest in focus.

Entertainment Journalist and Chief Executive Officer of Best of Nollywood Awards, BON, Seun Oloketuyi disagrees with sentiments that government had any ulterior motive in the selection of committee members or that it needs to consult with any set of leadership before nominating people.

In his words: “I think the Minister does not owe Nollywood any explanation for the appointment. He has the prerogative to appoint whoever, he wants. Everyone on that committee is qualified to be there. Who would fault Ali Baba’s over 30years in the entertainment industry or question Segun Arinze’s ability to speak for the industry with his wealth of experience or Bolanle Austin-Peters and Charles Novia? I have read several memos signed by different acclaimed guild and association heads, which I think is unnecessary.

If all the associations send their members into the committee, how about others from other sectors of the creative industry? For me those selected are responsible individuals with track records of integrity and more over, their individual careers speak volume of their personalities. What they deserve is cooperation from the industry,” he submitted.

Publisher of Zebranewsonline, Abiola Alaba Peters agreed with Oloketuyi as he said: “We are all part of the creative industry, but I wonder why the Nollywood subsector is trying to take the day, because of their large number. I think the minister whom I believe acted in good faith has only decided to work with those he considers frontlines in the industry, in terms of career achievements, for want of a better word, and without trying to disparage anyone.”

Although, Nollywood seems to be the most vociferous with their agitation against this purported appointment, the Guild Of Nigerian Dance Practitioners, GONDP, is also unhappy.

In a conversation with Apple’s Bite International Magazine, the Lagos Chairman of GONDP, Ugo Obiayo decried the non-consideration of dance as a profession, which sees professional dancers left out in the scheme of things.

Obiayo insisted that the dance sector deserves to be adequately represented in the creative industry committee and vowed to ensure that the concerns of dancers were pushed to the federal government through the committee.

While agreeing with the position of her Chairperson, Celine Ukalina, a dance practitioner and member of GONDP however admitted that the subsector has a lot of internal restructuring to do if it must be recognized.

“I was upset, when I first heard about the committee and saw the post on Ali Baba’s Instagram page. My first reaction was like, what about dance? And Ali Baba replied in the comment session. You see, while it is unfair that dance is being maligned in the scheme of things, I’d still not blame anyone. The thing is, we still need to put our house in order. You don’t cry foul are at all times when you feel cheated. Sometimes, we have a blame.

Dance has come a long way, we have people we trusted to look out for us, but they did not. The guild does not have a structure that caters for the people. There is no statistics, no data base. We need to put up a document that evaluates us. It will take a lot for even dancers to believe that the guild can represent them, but we are getting there,” Ukalina concluded.

A Selfish Agenda or An Altruistic Call to Service?

While most agitators have continued to clamor for what seems like the selective interest of their guilds, Chair of the Covid-19 Creative Industry Committee, Ali Baba told eelive.ng that the creative space is bigger than any sectional interest.

Speaking further he said, “The issue with most people is that personal interest comes first. Those who believe they have the numbers and are the strongest should get it all.

In all fairness, if you have followed my commentaries since this committee was announced, I have been talking about the comedy industry. It is because of the understanding that this course is bigger than that sector. Nollywood cannot represent dance. Moreover, most comedians are doing well and earning more than the average actor. Nollywood is not the totality of the creative industry, and even these guilds don’t represent the totality of interest of practitioners. I’ll explain, for instance, not all actors belong to AGN, not all writers belong to the Association of Nigerian Authors, not all musicians are members of PMAN,” the King of comedy concluded by assuring that: “the committee’s submission and recommendation to the federal government would be as holistic as possible”

Deal or No Deal

Yet, people like Okafor insist that government must deal with the tendency to abridge the right of every part of the movie industry to contribute to anything that has to deal with the industry. They opine that this should remain important to any meaningful step government plans to take on behalf of the industry.

Okafor told this tabloid in the final analysis: “It is not horrendous in any way to communicate with the authorities of industry guilds. In 2015, during the beginning of Buhari’s first term, when the government was going to make loan facilities available, they reached out to us through this same structure.

Why is it now impossible to reach us through that structure? An industry that contributes as much to national GDP and employs over 2.5 million youths, deserves some respect. We have come a long way, since 1992, when Living Bondage was first made.

I think the government is trying to divide and rule practitioners.”

While this may appear appropriate advocacy in some quarters, some observers feel that the rumblings within Nollywood may indeed portray as an enclave of petty ambitions and rivalries. Such observers argue that practitioners in Nollywood as most critical of the committee even though the subsector has more members in it than any other arm of the creative industry. “what I think is that all these people arguing would rather be the ones on the committee rather than allow anyone else represent their interest and that is where the problem of Nollywood lies.

Everyone with their chiefdoms, to the disadvantage of all other,” a leading industry voice who asked not to be named told Bite International Magazine.