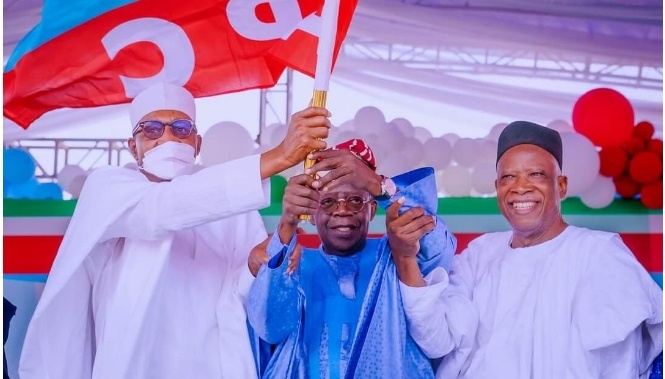 The All Progressives Congress (APC) presidential candidate, Asiwaju Bola Ahmed Tinubu’s decision to nominate a fellow Muslim as vice-presidential candidate for 2023 presidential election is a recipe for renewed sectarian crises that could destabilize Nigeria, an intelligence report by the Department of State Service (DSS) has revealed.

The classified report was sent to President Muhammad Buhari by the State Security Service and shared with an online newspaper, Peoples Gazette, by national security officials this week.

The document, which got to the president by way of the National Security Adviser (NSA), Gen. Babagana Monguno (rtd), said Tinubu should consider security implications of his selection before making it public.

“The SSS produced the report and handed a copy to the NSA,” an intelligence officer told The Gazette.

“The NSA looked at the report and added it for security briefing to the president.

“Simply put, our understanding is that the alliance will destabilize Nigeria and embolden attacks on Christian citizens from their fellow Muslim citizens.

“The distrust Christians are likely to harbor against a presidency occupied by two Muslims won’t make our work easy at national security level,” the source who spoke to The Gazette said.

The official said President Buhari was not involved in the deliberations that led to Tinubu’s announcement of Kashim Shettima as his 2023 running mate to the ire of Christians across the country.

“People can say whatever they like about Mr President, but as a senior intelligence administrator I can guarantee you he was not involved in Tinubu’s decision at all,” the official said in a remarkable moment of candor.

Another official said the report was commissioned after Tinubu became the standard-bearer of the ruling APC on June 8 and started embracing the idea of a Muslim-Muslim ticket as the most potent strategy to be elected as president in an ethnically and religiously polarized country like Nigeria.

Although the online newspaper did not make public the classified report but currently there is ongoing heated debates by Nigerians for and against the APC’s Muslim-Muslim presidential ticket.