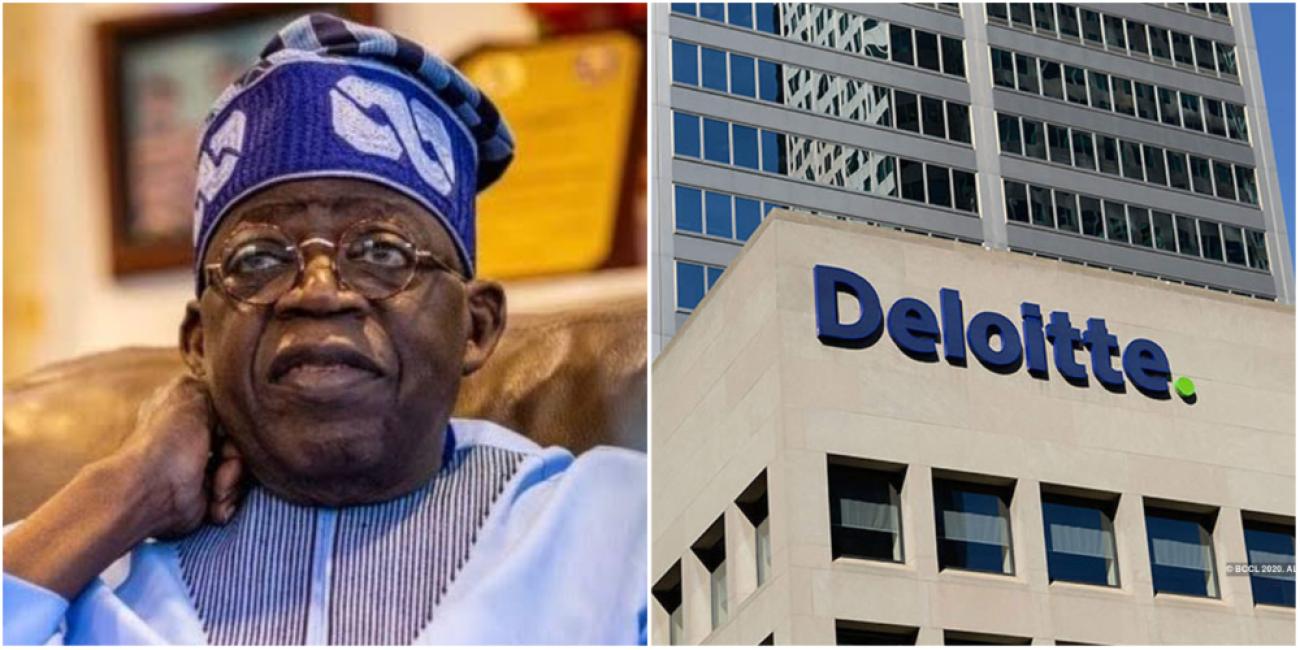 The certified US court judgment documents had surfaced, showing that a US District Court indicted the former Lagos State governor for drug dealings and money laundering.

United States company, Deloitte, has stated that the presidential candidate of the All Progressives Congress, APC, Bola Tinubu, never worked with the firm at any time let alone pay him $1.8million as salaries and bonuses.

Deloitte’s response was contained in a response to a subpoena ordering it to make available Tinubu’s bonus history with the organisation – the comment becoming the latest controversy on Tinubu’s links with drugs trafficking and court cases in the US in the 1990s.

The company’s response quoted in a report by investigative journalist, David Hundeyin, and published in West African Weekly, was signed by Tish Negron, Senior Legal Specialist.

“Bola Ahmed Tinubu has claimed that he made $1.8 million from salaries and bonuses while working a consultancy job at Deloitte USA.“So we subpoenaed Deloitte USA to provide evidence of Tinubu’s employment and staff payment records, and this is what came back,” Hundeyin posted on Monday.

Applesbite reported how certified judgment documents released by the Chicago, US court, indicted Tinubu of drug dealings and money laundering in 1993.

The certified US court judgment documents had surfaced, showing that a US District Court indicted the former Lagos State governor for drug dealings and money laundering.

The certified court documents indicated that Tinubu was a drug lord who entered a plea bargain in which he voluntarily agreed to forfeit his assets to American authorities in 1993 instead of facing trial.

Reacting to the circulation of the documents, the spokesman for the APC presidential campaign, Bayo Onanuga, had however described the documents in circulation as a “campaign of calumny,” adding that the “Muckrakers are back in business.”

Tinubu’s health has also been shrouded in controversies with several reports done by Applesbite exposing the health battles of the APC candidate.

It was reported in October that Tinubu returned to Nigeria after a 12-day trip to the United Kingdom.

Applesbite had reported that the former Lagos State governor left the country on September 24 for the UK on a medical trip.

Furthermore, the West Africa Weekly report said, “A US District Court would seem like an odd place to begin this story, but this is no ordinary story. The main character in this story is an individual whose entire existence is as puzzlingly mysterious as it is loud and public. For at least 30 years, Bola Ahmed Tinubu has been at or near the grinding face of frontline politics in Nigeria, yet a peek one inch below the surface reveals how little is actually known about the man who some say is Nigeria’s president-in-waiting.

“First of all, there is the age controversy. How old is the man really? What is his real date of birth? Short answer, no one actually knows. Like many Nigerians born into the less-than-auspicious circumstances that characterised his childhood in Iragbiji, Osun State, he himself may not even know. Similar controversy exists around what his actual name is. A popular theory is that “Bola Ahmed Tinubu” is an identity that he transitioned into at some point after moving to Lagos to live with his surrogate mother, Alhaja Abibatu Mogaji…

“At the time when Tinubu informed the US authorities that he was a lowly treasurer at Mobil on $2,400 a month after having apparently been the world’s most generously remunerated junior Deloitte accountant, he was doing some decidedly non-lowly things in the background. While working on this story, a bit of research across US land registries threw up a few pearlers like this from the Land Records Department at Prince George’s County, Maryland.

“Was the 1993 election annulled because of MKO Abiola’s alleged drug ties? Bola Tinubu for one, would certainly hope not. Not only does he have very real and proven drug ties in addition to explicitly positioning himself as the assumed successor to MKO as the political leader of Nigeria’s Yoruba ethnic group, but he has also picked a Muslim running mate ahead of next year’s elections. The only other electoral frontrunner in Nigeria’s history to do that was – no prizes for guessing.

“Still, if anybody can manage to avoid having this particular bolt of lightning strike twice, it could well be Bola Ahmed Tinubu, the luckiest politician in Africa. When he needed money to launch a political career in the 90s after all, he apparently had $1.8 million saved up from bonuses and salary payments as a junior accountant at Deloitte. Very handy.

“When his chosen successor faced a near-certain electoral defeat in 2007, the more popular frontrunner coincidentally turned up dead inside his bedroom in Dolphin Estate, Ikoyi – one of the safest neighbourhoods in Nigeria. He had been strangled to death. Naturally, the chosen successor then won the election. Happy coincidence.”