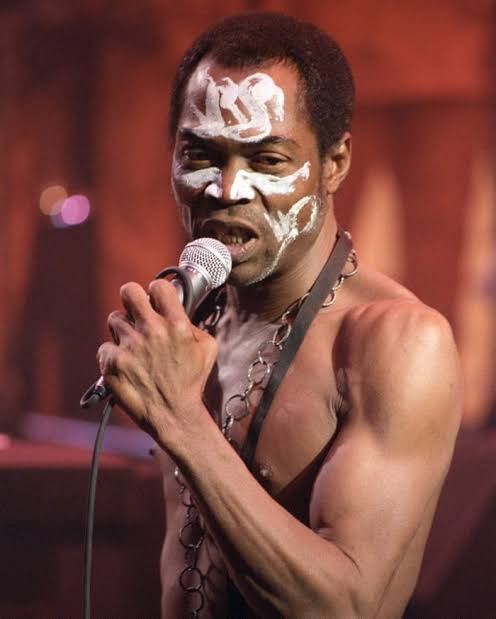 That day, the twelfth day of August, 1997 was electric…a deep pall of sadness swept over the nation, yet a distinct halo of exhilaration swooshed over metropolitan cities of Nigeria…as the prodigiously gifted enigma who called himself “one who keeps death in his pouch – he who resists death” was laid to final rest in his large Gbemisola Street, Ikeja, Lagos home.

People! All sorts. The Good. The Rough. The Naive. All sorts. At the sunset of Africa’s revered iconoclast, the several shapes and shades of humanity were fully represented.

It is to the glory of Nigeria and the unbended souls of our fallen African heroes that the “send-off’ of Fela Anikulapo Kuti should attract such an unprecedented turn-out of people, that even the usually sedate newspapers could describe it as “mammoth”.

In death, Fela poked his fingers in the faces of dictators, corrupt people and oppressive apparatus, all over the world. But the pain lingers for his immediate constituency – the Nigerian populace. They have lost the single most virulent voice capable of communicating their frustrations, neglect and anguish to those whose birthright includes oppression and corruption. The poor and needy of Nigeria are now deprived of a ringing voice who could put his political poetry into music and blare it into the consciousness, and to the embarrassment of the establishment. Now, there is a strange silence – isn’t there?

Do the Nigerian people have any succour in a rejuvenated voice who can step into Fela’s self-appointed role? Can we begin to rejoice at the possible emergence of a force that will carry the crusade of Fela on wax, even without the so-called excesses of the giant? From among our legion of musicians and singers, is there one or two whose creative genie will be kick-started by the shock of Fela’s absence and the necessity for another trenchant voice in the wilderness that is Nigeria?

We took a short drive across the boulevard of Nigerian music; probing and synthesizing the landscape littered with serious pretenders, professional misfits, genuine talents and colourful lay-abouts. Of course, Nigeria is not short of musicians: every street, similar to football, has a silent star – either in a full-blown dreamland or in extended depression. But who among our “super-stars” (largely created by our exuberant music press) can muster the courage, virtuosity, consistency and tremendous knowledge of Fela?

We do not need martyrs, but we do need exemplars who can instruct us on the benefits of martyrdom. How will our history look like without the fact that during the darkest period of our national life, when the civil war was ravaging, only the then Olufela Ransome-Kuti, arguably, had the nerve, audacity and gut to lambast the atrocious carnage Nigerians were turning the Igbo cities to? He valiantly supported the secession of Biafra!

Apart from lamenting the socio-cultural inadequacies of his people as in Jeun Koku, Sakara Oloje, Roforofo Fight, Excuse O, Water E No Get Enemy, E No Possible, etc; Fela lambasted the inferiority complex of his own people, and evoked the pangs of nationalism with JJD, Lady, Gentleman, Colomentality, Why Blackman Dey Suffer, Buy Africa, etc.

Fela struck with blinding fury at sundry governments foisted on his people, specifically denouncing their inefficiency and corruption. The catalyst of his more politically scathing lyricism began with the regime of General Olusegun Obasanjo (rtd). From 1976 till his last recorded album in 1993, he thundered relentlessly with: Zombie, No Bread, Ikoyi Blindness, Sorrow Tears and Blood, No Agreement, Suffering and Smiling, Vagabonds In Power (VIP), Authority Stealing, Power Show, International Thief Thief (ITT), ODOO, Arrangement and Beast of No Nation (BONN).

In all his unflinching vitriol at successive blundering governments, Fela’s object of attack never folded their hands and gaped entranced by his pulsating rhythms. From 1974 till few months before his death on August 2, 1997, Fela was arrested, detained, beaten, clubbed, jailed, tortured, disgraced, abducted, thrashed by the muscles of the state – sometimes for weeks and months. He was once jailed for 17 months! In l977 alone, at the height of his confrontations with the Obasanjo regime which led to the sacking and razing of his first Kalakuta Republic, Fela was arrested and detained every quarter of the year!

But, this is not an empty search for “shoe-steppers”, clones, imitations or “sound-a-likes”. We do not glorify confusionists, rabble-rousers, chauvinists and pseudo-critics. But who will be our authentic voice now? Who?

Who will carry the banner for millions of voiceless and powerless souls in Nigeria, nay Africa? Who will dare the beasts in our rulership, and remain constant as Anikulapo-Kuti? Who will withstand inhuman treatment in the hands of brutish security personnel, with unbending and undefeated spirit? Who will be our next megastar? Who?

Before we skirt around the musical firmament searching for rough gems in a cesspool, let us underscore the tragedy of our current circumstances, 23 years after Fela’s demise. Today, to our collective shame, the impunity and affront of our political and executive class in sacking and sweeping treasuries under all sorts of colourful pretensions and programmes, have reached an all time high.

Nowadays, institutional corruption and wickedness have been decorated as federal character, quota system, affirmative actions, social interventions and such fancy euphemisms for playing “ludo” with public funds by appointees of so-called anti-corruption crusaders. We have now elevated our frustrations, spiralling poverty, lack of vision and hopelessness to the point where security blunders, police bestiality, rapes of minors, hollow exhibitionism on social media, thoughtless hate speech, and disreputable video clips, among other callous displays, are condoned, and even justified.

Our gluttonous elites swagger around the country tormenting and titillating our vulnerabilities with their opulent and unconscionable dalliances. They do as they wish, steal as they are led, and faint or bluster on live television during make-believe probes – without care or reprimand.

Of course, there is hardly any one to lambast and lampoon their excesses… no one to call their scurrilous spades the exact inglorious names they ought to bear… allowing us the probability of moderating and cowing the propensities of our greedy five percent from collapsing our economy…earlier than anticipated.

Next time, hopefully, we shall poke through the living tapestry of our creative adventurers, perhaps we can find a credible voice of reproach and condemnation. Or more.

Related tags : 23 Years After: Did Fela Leave With Our Courage? By Femi Akintunde-Johnson