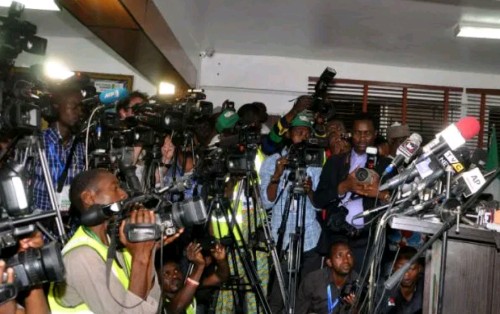 The number of journalists jailed around the world has reached a record-breaking figure.

A report by the Committee to Protect Journalists (CPJ) found that 363 reporters were deprived of their freedom as of December 1, 2022 – a new global high that overtakes last year’s record by 20%.

According to the report, at least 56 journalists were imprisoned across Africa in 2022 with Egypt being the top jailer.

“Egypt remains the top jailer of journalists across Africa, despite some releases under international pressure. Eritrea is one of the most censored countries in the world. The majority of the journalists imprisoned there have been detained without trial for 21 years, since the crackdown on the independent press in 2001,” the report reads.

“Cameroon has appeared on the census every year since 2014, with some currently jailed journalists held since 2016. Senegal has one journalist imprisoned for their work, Pape Alé Niang, marking the first time the country has been on the census since 2008.

“Three of the 4 jailed journalists in Rwanda are YouTubers. Two of them – Aimable Karasira and Dieudonné Niyonsenga allege that they have been tortured and ill-treated while imprisoned.

“French journalist Olivier Dubois, who was abducted in Mali in April 2021, and five Tigrai TV journalists, detained in the rebel held city of Mekelle in the northern Ethiopian state of Tigray, are not included in the census because they are in the custody of non-state actors.”

Twenty-four journalists and media workers have been killed in Nigeria between 1992 and 2022.

On October 13, 2022, police operatives detained Abdulrasheed Akogun alongside his brother Dare Akogun on criminal charges for comments they posted in a WhatsApp group.

The journalists were accused of criminal conspiracy, defamation, inciting disturbance, injurious falsehood, and cyberstalking for alleging that Rafiyu Ajakaye, chief press secretary to the Kwara state governor, financially influenced the outcome of a recent election in the local chapter of Nigeria Union of Journalists.

Recently, Oloye Samuel, publisher of Taraba Truth and Facts newspaper and the chief executive officer of Rock FM 92.3 in Jalingo, was reportedly arrested by the state government’s agents over a report that Darius Ishaku, Taraba’s governor, had plans to sell the state liaison office.

In Iran, dozens of journalists are among the estimated 14,000 Iranians arrested during the crackdown on protests sparked by the killing of Mahsa Amini, a 22-year-old Kurdish woman who died in police custody after being arrested for allegedly breaking Iran’s hijab law.

“Authorities have imprisoned a record number of female journalists – 22 out of the 49 arrested since the start of the protests are women – a reflection of the prominent role they’ve played in covering this women-led uprising,” the report said.

“In China, authorities tightened online censorship during recent protests over the government’s zero-COVID lockdown policies and several journalists are reported to have been briefly detained while covering the demonstrations.

“The number of Myanmar journalists known to be jailed on December 1 rose to at least 42 – up from a revised 30 last year – as the regime doubled down on its efforts to mute reporters and disrupt the country’s few remaining independent media outlets. Many news organizations remain reluctant to identify their detained staff and freelancers to avoid the harsher sentences often meted out to journalists.

“The number of journalists held in Turkey rose from 18 in 2021 to 40 in 2022 after the arrests of 25 Kurdish journalists in the second half of the year. The journalists’ lawyers told CPJ all were jailed on suspicion of terrorism – a result of the country’s ongoing efforts to silence those it associates with the outlawed Kurdistan Workers’ Party (PKK).

“Belarus held 26 journalists in custody on December 1 – up from 19 last year. Almost half are yet to be sentenced; two are serving terms of 10 or more years. All known charges are either retaliatory or anti-state, such as treason.”

CPJ and other human rights organisations including the United Nations (UN) have continued to call for the release of the imprisoned journalists.