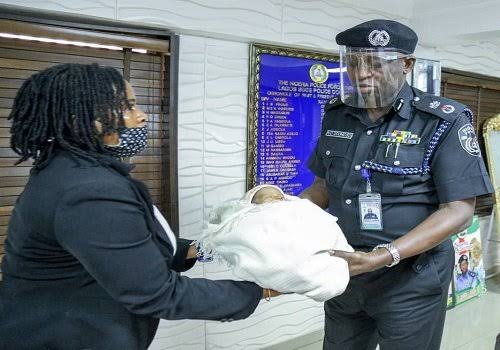 Abandoned day-old baby boy rescued by Lagos police, may be adopted by CP

A day-old baby boy, who was abandoned and left in the cold in Lagos State, has found warmth in the arms of police officers, as he was rescued on Monday, March 15, 2021, at about 10:30pm.

Fortune also smiled on the bundle of joy, while great future awaits him, as the state Commissioner of Police, Hakeem Odumosu has expressed the desire to adopt him.

Next Read: Legislation: Shina Peller’s Motion on Reinvigoration of NOA Gets A Nod

The police image-maker in the state, CSP Olumuyiwa Adejobi, in a statement on Tuesday, March 16, said that the baby was found by a Lagos resident at Oladejo Street, Oko Oba Lagos, at 10:20pm, and had informed the police operatives attached to Abattoir Division of the command promptly.

In a show of responsibility and compassion, the PPRO said that the police personnel quickly went to the scene and rescued the baby, in order to give him necessary medical attention and keep him safe.

On hearing the news, the state Commissioner of Police Lagos State, Hakeem Odumosu received the baby in his Ikeja office on Tuesday, and immediately ordered the Gender Unit of the command to hand over the baby to the Child Protection Unit of the Ministry of Youth and
Social Development of Lagos State.

Adejobi disclosed that the unit is in protective custody of the supernatural gift.

He added that Odumosu also expressed the desire to adopt the baby, and made known his intention to discuss with the Minsitry of Youth and Social Development on processes of accomplishing his desire as soon as possible.

The police boss urged women, especially young ladies, to desist from the callous act of abandoning babies, which he described as condemnable.