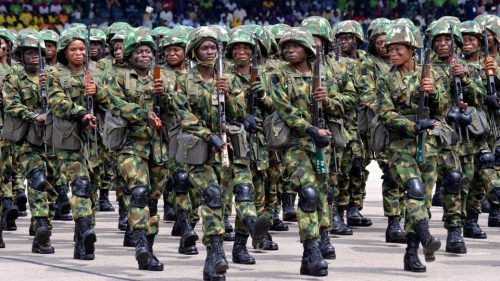 At least 300 female soldiers have been deployed by authorities in the Nigerian Army to tackle banditry, kidnapping, and other related crimes along the Kaduna-Abuja highway.

100 of the 300 soldiers under the Nigerian Army Women Corps were on Wednesday received by the Kaduna State Governor, Malam Nasir El-Rufai

While addressing the troops, El-Rufai expressed hope that with the deployment of the female soldiers, the insecurity along the highway would abate.

The Governor commended the military for deploying more troops as a way of strengthening the existing ground troop with the view to tackle the incessant kidnapping along the highway.

The Governor said, “The problem of Abuja-Kaduna road will be over with these female soldiers because what a man can do a woman can do better. We believe in the capability of women in this state.

“I am confident the road will be the safest in Nigeria. We will do everything possible to make this operation comfortable. We are very happy to have you. Your presence will inspire other girls to join the military. That is why we have a female deputy governor to inspire other women.”

The General Officer Commanding (GOC) 1 Division, Kaduna, Major-General Usman Mohammed, had earlier acknowledged the support provided by the state government to the military in its internal security operations.