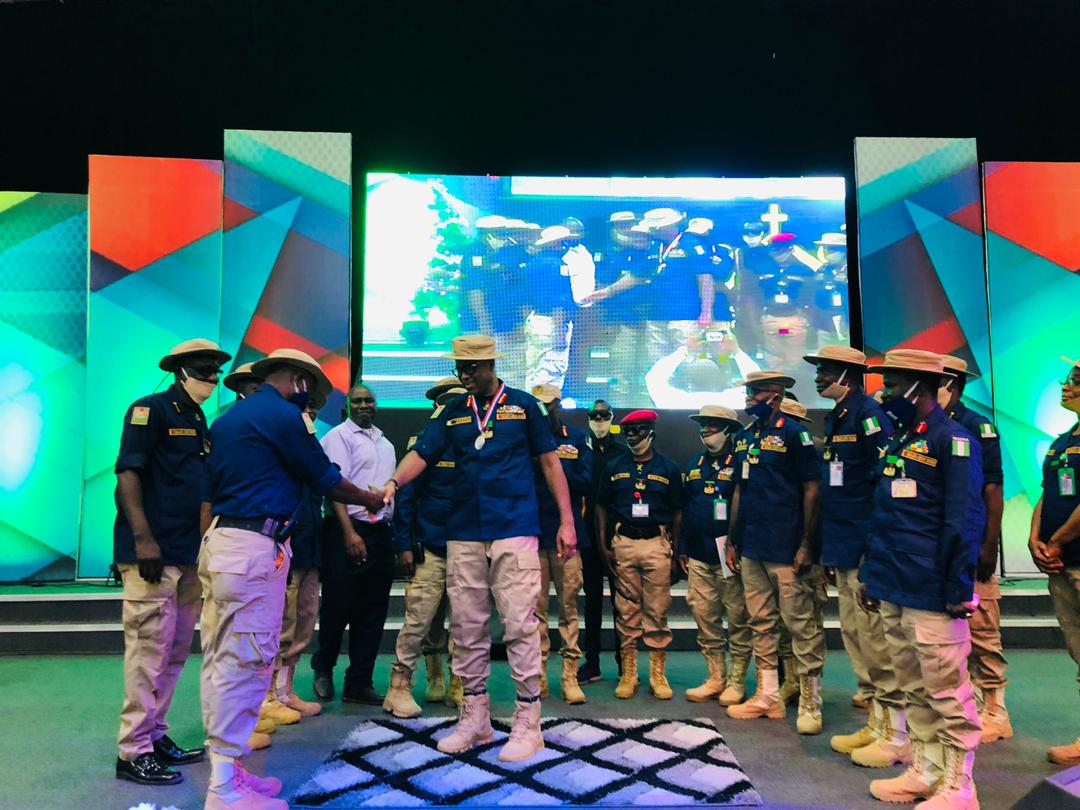 His Eminence, Archbishop Designate Isaac Idahosa, the presiding bishop of God First Ministry Inc., widely known as Illumination Assembly, has been decorated as Grand Commander General of Chaplain Corps and Rescue Mission on Sunday, December 27 at his Addo Road, Ajah, church auditorium.
In addition to his decoration as general commander, the charity driven cleric was also awarded with 2020 Performance International Award by the Universal Chaplain Corps and Rescue Mission; an award conferred on distinguished personalities around the world contributing to the development of humanity and promoting co-existence in the society too.

Among other eminent individuals across the globe that have bagged similar decoration and award in the past are Olusegun Obasanjo, former head of state and democratic president of Nigeria, Dr. Ernest Bia Koroma former president of Sierra Leone and his first lady, Air Vice Marshal Chukwu Chris, Nigeria, Chief of Defense Staff Sierra Leone and also Head of Chaplain in Kenya, likewise head of chaplain in Georgia, America.

According to Chaplain General Tunde Bankole who led the entourage of uniform men to the decoration ceremony, the choice of Archbishop Isaac Idahosa was not unconnected from his numerous philanthropic contributions to society, and also because he is a man without scandal.

“We have a list of so many prominent people in the society, and we deemed him worthy of this decoration because of his numerous contributions to humanity. Like you see him do today during service announcing palliative distribution and giving out cash to the widows in his congregation. We are on the lookout for individuals with enviable personality, who give back to society, and have also promoted peaceful co-existence among the people and Archbishop Idahosa passes all that bill,” Bankole explained.

Speaking further, he noted “…And also, importantly is that Bishop Idahosa is a man without any controversy whatsoever. He is indeed a man of high credibility,” he submitted.

“One of the responsibilities of the Universal Chaplain Corps and Rescue Mission is organizing prayer summits for nations of the world. When the military engages their professional training with arms to combat insurgency, insecurity, terrorism and banditry, we believe in using the spiritual warfare to engage too.

“Therefore, one of the responsibilities expected of Archbishop Idahosa as our grand patron is interceding for nations and also praying for the organization. He is also expected to intercede through prayers for the leadership of our dear country Nigeria. His responsibility is also advisory,” Bankole remarked.


In his acceptance speech, Archbishop Designate Isaac Idahosa appreciated the rank and file of the Universal Chaplain Corps and Rescue Mission for deeming him fit for such honor.

“I want to appreciate the leadership of Universal Chaplain Corps and Rescue Mission for deeming me worthy of this honor to serve as Commander General of the organization. It is a noble course, and one I am glad to be a part of. I assure the organization of my utmost support in contributing to the development of mankind,” Idahosa highlighted.