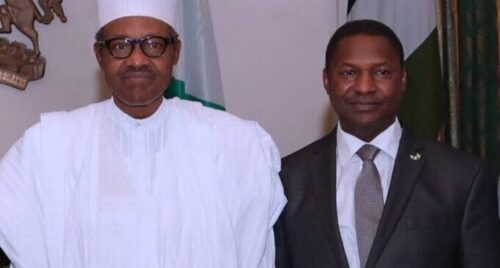 Abubakar Malami, attorney-general of the federation (AGF), says the federal government is committed to ending violence against journalists.

The AGF said this on Tuesday while speaking at the 2022 international day to end impunity for crimes against journalists.

He, however, noted that journalists are often victims of violence during elections.

“As we approach the 2023 general elections in the country, the role of journalists in the democratic transition cannot be overemphasized,” the minister said.

“We noted, with dismay, reports of some forms of attacks on journalists and voters by suspected hoodlums during elections in some parts of the country. President Muhammadu Buhari-led federal government is committed to bringing to an end these undemocratic and uncultured activities through the administration of legally justifiable approaches to the perpetrators in order to serve as deterrence to others.

“I am pleased to say that the federal and some state governments have taken precautionary and proactive steps in taming the tides. The 2020 global index for impunity for crimes against journalists by the Committee to Protect Journalists (CPJ), released on Wednesday 28th day of November 2020, indicated that Nigeria is the only country that came off the index from 2019.

“This achievement is not unconnected with deliberate and committed efforts of the President Muhammadu Buhari-led federal government through the implementation of many reforms in the Nigerian justice sector to include increased access to justice, speedy justice dispensation, decongestion of Nigeria’s correctional centers and judicious implementation of the Criminal Justice Act.”

The AGF urged those involved in the electioneering process to carry out political activities in accordance with the provisions of the Electoral Act.

“Let us join hands in making sure that all campaign utterances are humane and in conformity with global best practices, thereby contributing to a violence-free electoral process,” he said.