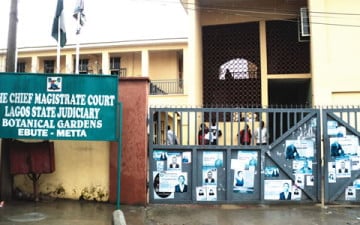 The Chief Magistrate Court in Ikeja, Lagos, has remanded one Mohammed Algoni over the alleged sexual molestation of an eleven-year-old boy in his care.
Applesbite understands that Algoni who is confirmed as an Arabic teacher reportedly sodomized the child at an Arabic boarding school where he was working.

Narrating the event, the prosecutor, ASP Raji Akeem, said the victim had returned home for the recent Salah break and told his mother that he wasn’t going back to the Arabic school again.

When she asked why, the boy reportedly told his mother how the defendant who happened to be one of his teachers, was sodomizing him.

Akeem said Algoni’s offence was reported at the police station and the defendant was arrested. The prosecutor stressed that the offence committed contravened Section 261 of the Criminal Laws of Lagos State, 2015.

The defendant was brought before the Ikeja Chief Magistrate Court on a charge of sodomy.

During the court proceedings, the Chief Magistrate, B. O Osunsanmi, did not take the defendant‘s plea.

Osunsabmi reportedly ordered that Algoni should be remanded in Kirikiri Correctional Centre pending legal advice from the Director of Public Prosecution.

The magistrate adjourned the case till September 28, for receipt of the DPP’s advice, Naija News understands.

Applesbite recalls that a video had earlier surfaced on social media indicating that a suspect was arrested with a wheelbarrow load of human parts at Ogwashi-Uku with a voice that the suspect was selling his pieces of staked ‘suya’ meat for N100.00.

The voice added that on a good bargain, he could dispose of two sticks of the roasted meat for N150.00 but consumers never knew that they were consuming human meat.

Reacting, however, to the viral video, the State Police Public Relations Officer, PPRO, DSP Bright Edafe, said the command had not arrested anybody in possession of human parts.

Edafe, who stated this while speaking to Vanguard, explained that what the police evacuated was a victim of a hit-and-run driver, explaining that the body of the unidentified victim was totally shattered.