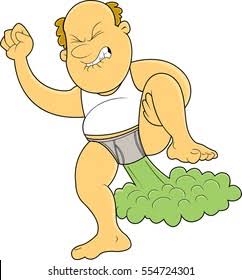 Ministers in the United Kingdom are reportedly fretting in private over the possibility COVID-19 is being spread via farting.

Various news outlets in the UK said the ministers pointed to evidence that the virus could be spread by people breaking wind in confined spaces such as lavatories.

One said they had read “credible-looking stuff on it” from other countries, although government scientists are yet to produce a paper on the matter, Yahoo News reported, quoting The Telegraph.

The source said there had been evidence of a “genomical-linked tracing connection between two individuals from a [lavatory] cubicle in Australia.”

There were also “well-documented cases of diseases spreading through waste pipes during lockdowns in Hong Kong when the U-bend had dried out.”

The science is not definitive, however, and another minister stated that as COVID-19, is “a respiratory disease, transmission and shedding is mostly taking place through the mouth and actually mainly the nose”.

A spokesman for Boris Johnson said he was not aware of claims that the virus can be spread by flatulence. The spokesman added: “We keep the latest scientific evidence under review.”

Healthy people tend to break wind between five to 25 times a day, and testing has found that SARS-CoV-2 can be present in faecal material.

The risk of spreading Covid this way is thought to be less, however, because wearing underpants and clothes below the waist would act to filter out harmful particles in the same way a face mask can.

Suggestions of spreading the virus through flatulence first emerged in Australia last year when Norman Swan, an Australian medic, advised on an ABC podcast: “No bare-bottom farting.”

Scientists discovered earlier in the pandemic that genetic fragments of the virus could be detected in sewage. In the UK, officials ramped up a programme to analyse wastewater for early signs of coronavirus in May, and the programme now covers two-thirds of England’s population.

It has helped with the detection of local outbreaks or the presence of variants of concern, which can be linked to specific communities via the sewage treatment network, and Dr Jenny Harries, the chief executive of the UK Health Security Agency, described it as “an additional detection system” for Covid.