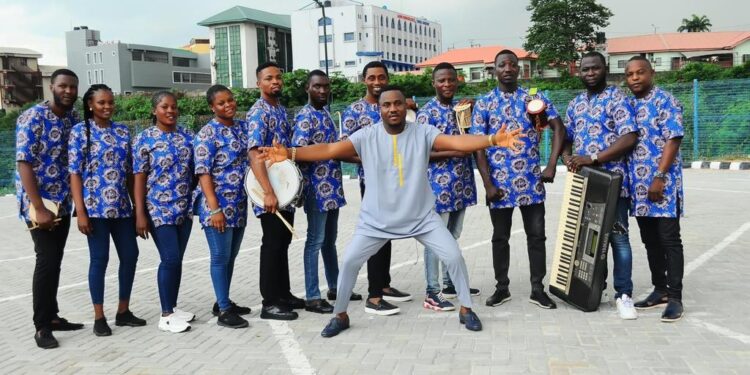 The talented wave making Gospel Juju Tungba group known as Dotun Future (The Future Band) led by Dotun Ogunlabi in association with Sammek Moments Entertainment USA, will be hitting United States of America on a playing tour that will take them to 13 states including Maryland, Atlanta, New York, Houston, Chicago and a host of others.

According to the organiser, a US-based music promotion company, Sammek Entertainment, owned by Mr Samuel Ekundayo, several multi-faceted cultural events have been put together in partnership with the Alliance of Yoruba Organisations and Clubs and other well established cultural association and promoters in the USA and Nigeria to promote the values and morals of various Nigerian cultures while Dotun Future is in the US.

“As we all know, Nigeria encapsulates great and beautiful culture and tradition which need to be more jealously guided and promoted because of its many influences all over the world.“Therefore, the tour can be captioned Festival of Culture a viable platform to boost the cherished and rich culture.

BBNaija: ‘I don’t want to be like Ozo’, Sheggz says as he expresses feelings for Bella

The Future Band have been in existence for over two decades and have been dishing out deep cultural laced fusion of traditional beats spiced with inspirational and gospel vibes.The award winning band have thrilled in churches,social events across Nigeria with a well spread wide fans base. He recently returned from a successful tour of United Kingdom where his audience never had enough of his vocal and up beat music delivery.

While in United States, the band is expected to perform at various locations and events including, “Alujo Night” at STEVE ALLEN THEATRE 4773 HOLLYWOOD BLVD, LOS ANGELES CA 90027.