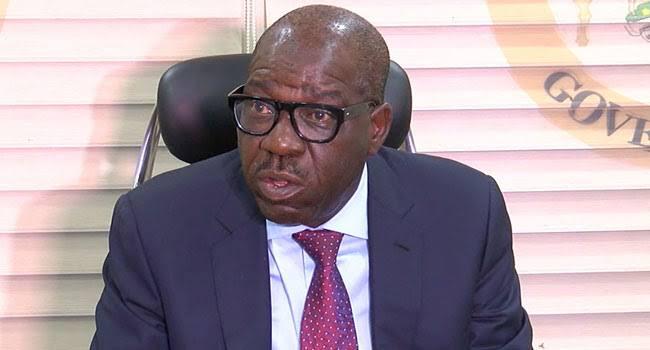 Governor Godwin Obaseki appears to have some ace off his sleeves, he appears not to be perturbed at the emergence of Pastor Osagie Ize-Iyamu who has emerged as the governorship candidate of the All Progressives Congress (APC) in Edo.

In a live interview monitored by Apples Bite International Magazine, Obaseki spoke as guest on Channels TV Sunrise Daily, where he stated that no man can stop his ambition to return as Governor of Edo State.

“I am not a violent person. But I am confident that the way I got into power is the same way I will return.

“God gave me power. If he wants me to return I will continue. No man can stop me. Power comes from God,” he said.

Obaseki speaking concerning violence during election said he has always canvassed for peace and believes election should not lead to bloodshed.

The governor who also spoke concerning the political rift within his party the All Progressives Congress (APC) in Edo State, stated that he is not distracted, adding that his focus is on developing Edo State

“This shouldn’t lead to bloodshed. We will not accept to be cowed and intimidated because some people think that they can manipulate rules and cut corners,” he added.

When asked if it’s not the resources of the people of Edo State that was used for him to become the governor, Obaseki said, “I have friends with resources. I worked for eight years behind the scene before I became governor.

“So all that insinuations about using somebody’s resources…I became Governor on the platform of the party and I am grateful for it.”

He expressed confidence that the rule of law will prevail in the forthcoming Edo State election because he is sure that Nigeria’s President Muhammadu Buhari believes in the rule of law and will allow things to be done openly.

Obaseki further noted that he is not in contest with anyone, stressing that he is confident of victory.

“It does not matter whether it is direct or indirect (primaries), I will win,” he said.

The National Working Committee (NWC) of the ruling APC, currently led by the National Chairman of the party and former governor of Edo State, Adams Oshiomhole had earlier on May 22 announced its decision to adopt direct primary for the coming governorship primaries in Edo State scheduled to hold on June 22.

The ambition to return as Governor- elect for incumbent, Governor Godwin Obaseki suffered fore closure, after
Ize-Iyamu, a former Secretary to Edo State Government (SSG), emerged on Tuesday night in Abuja through a consensus arrangement.

Apple’s Bite International Magazine gathered that Ize-Iyamu is a Pastor of Redeemed Christian Church of God(RCCG).

Ize-Iyamu was presented by chairman of the screening committee, Senator Francis Alimikhena, the representative of Edo North Senatorial District.