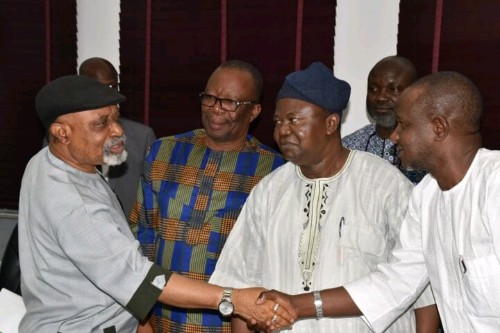 The Academic Staff Union of Universities (ASUU) has asked the federal government to honour its agreement with its members.

Lazarus Maigoro, chairman of the union, spoke at the University of Jos during a peaceful protest it organised on Tuesday.

It was earlier reported that members of the union called for a protest against the federal government’s half-pay policy.

Maigoro said the rally is to call on the government to pay the withheld salaries of its members and to honour the agreements it reached with the union.

“ASUU is saying ‘no’ to the casualisation of academics in the public universities through the payment of pro-rata salary as well as withholding of its eight months withheld salaries,” he said.

HE Conference To Hold In Lagos, Plans To Fetes 5000 Men

“We call on Nigerians to impress on the government the need to adhere and honour agreements it freely and willingly signed and entered with the union including the conclusion of the renegotiation of 2022.

“It is on the basis of these that our national body directed all chapters to hold this peaceful protest and lecture-free day to register our concern on the attempts by few Nigerians to destroy public universities.”

Maigoro noted that the ongoing struggle by the union is aimed at salvaging the university system from total collapse.

“It is no longer news that the Nigerian university system is currently facing its most existential threats,” he said.

“The systematic neglect, chronic underfunding, and lack of attention given to public universities and by extension the educational system have led to its inability to compete globally.

“ASUU had, over the years, engaged previous and current governments with the aim of addressing and arresting this slide into decadence.

“So, Nigerians should not see ASUU as the enemy of education but the body whose quest is to make university education the envy of all.”

He added that the numerous struggles by ASUU led to the creation of the Tertiary Education Trust Fund (TETFUND), the NEEDS assessment funds, and other funding streams to revive public universities.

He explained that its current effort is focused on university autonomy, funding, and the welfare of university workers.

He called on Nigerians to support the union in its struggle for a better educational system.

“As a responsible union, we will not be part of those who want to destroy public universities and this is why as law-abiding and patriotic citizens, we obeyed the court order and suspended our strike,” he said.