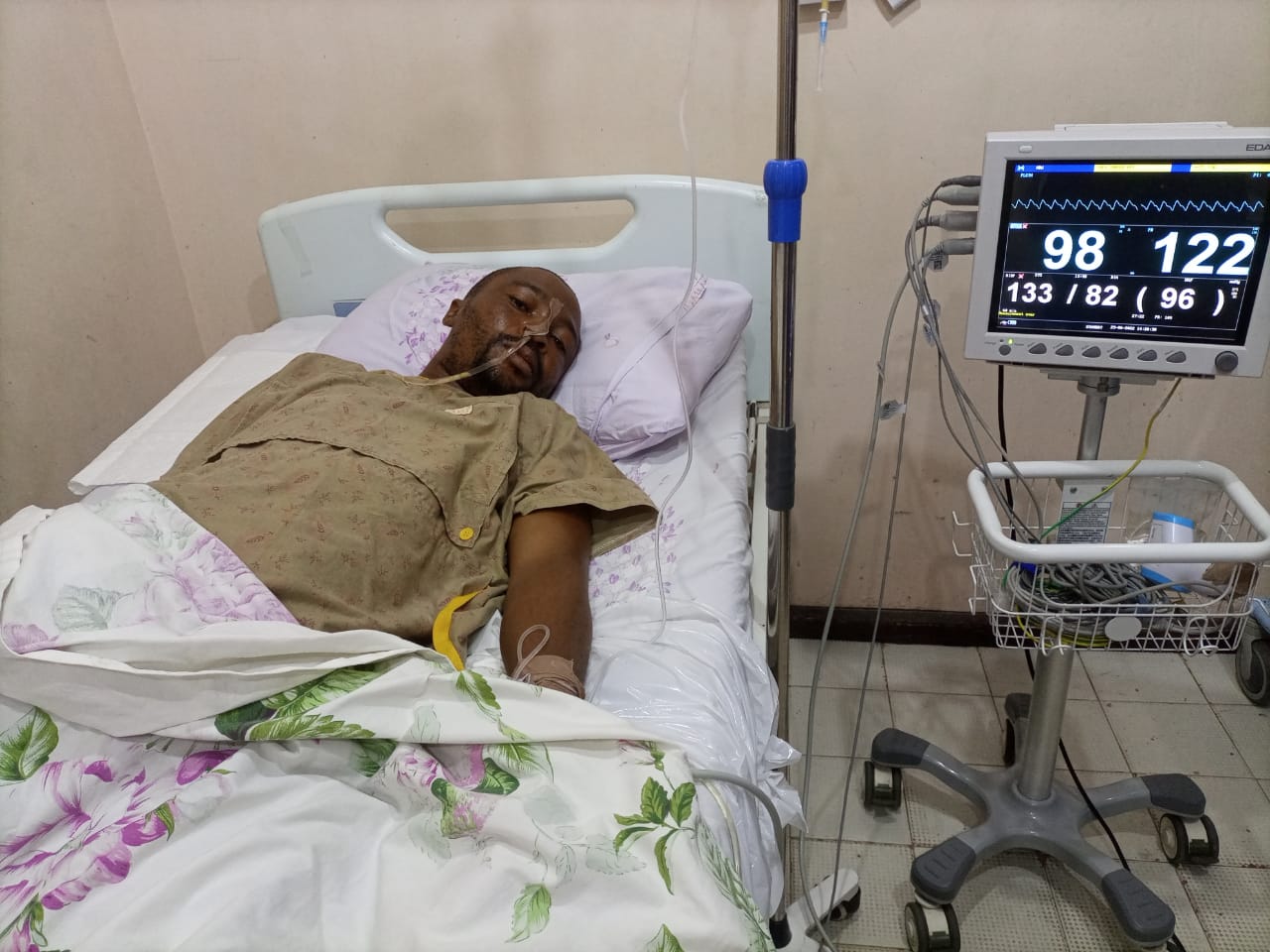 A 41-year-old truck driver and resident of Abeokuta, Ogun State, Sunday Olamode, tells DAUD OLATUNJI he is battling for his life after being shot in the stomach and leg by some operatives of the Department of State Services who were driving against traffic on the Lagos-Abeokuta Expressway

Tell us a bit about yourself.

My name is Sunday Olamode. I am 41 years old. I work as a truck driver. I live in Abeokuta, Ogun State.

Yes, I am married. I have three wives and seven children.

Can you narrate the incident that landed you in this hospital?

While returning from work on Monday (June 27, 2022), I ran into a gridlock at Itori; the traffic congestion was heavy. I couldn’t immediately tell what was responsible for the hold-up because I was far behind. The big vehicle directly in front of me started reversing. I couldn’t see what was happening at the front. As the big vehicle was reversing, I was trying to make way for it, so that I could find my own way too. That was when I saw some men wearing black clothes with DSS (Department of State Services) written at the back. They were coming towards me and ordering me to drive aside. But I told them to be patient for the big vehicle in front of me to clear off. As my motor boy was trying to control traffic for me to be able to move aside, I saw them approaching my truck. When
they got to me, they opened the door and started to drag me. As they were dragging me, I started hearing sporadic gunshots. And that was how I was shot.

17 states of the Federation received N65.46bn for out-of-school children – Report

You said their vehicle was facing yours. Were you driving against traffic?

What happened after you were shot?

I felt that my leg was numb and I couldn’t move for a moment. As I jumped down from the truck and landed on the ground, that was when I realized that I had been shot in the leg and stomach.

How did you get to the hospital?

Incidentally, a brother of one of my wives was also in the traffic. He didn’t know I was the one shot. He just came around like any of the other sympathisers who had gathered around me. That was when he saw that I was the victim and shouted, ‘Daddy Ayo!” My motor boy kept calling for help, saying I shouldn’t be abandoned to die like that. They started looking for a motorcycle to take me to hospital. I held my leg that was shot. They eventually got a motorcycle and I was taken to a private hospital in Itori. The hospital gave me first aid treatment but said the case was beyond what they could handle. They then referred me to the Federal Medical Centre, Abeokuta. But when we got there, they rejected me. I was then taken to the state general hospital at Oke Ijeun. I was also rejected at the state general hospital. Then I was brought to this private hospital, which admitted me and commenced treatment.

What did the DSS operatives do after shooting you?

They drove off after scaring everyone off with gunshots, which made people to run helter-skelter. It was after the DSS operatives had left the scene that people were able to come around me to rescue me. I am grateful to those people. I thank God for what they did.

Can you recognize any of those DSS operatives?

Not at all. But they were about five or six in number. I was so shocked and confused. I was already unconscious by the time they took me to the state general hospital (sobs). Two pellets were extracted from my stomach. The one that hit me in the leg passed out but right now, my leg is paralysed. I am not sure if I will even be able to use the leg again or work again.

What do you transport with your truck?

I transport granite. On that day, I went to deliver a load of granite overnight and was returning home in the morning when the incident happened.

What are you demands?

I want the authorities to fish out the DSS operatives who shot me; I want them prosecuted. I want justice. Government should not let these power-drunk and heartless officers get away with this act of injustice and human rights abuse. This should not be allowed to go unpunished in a country with a government and law and order.
My people have spent so much on hospital bill and as things stand, I don’t even think that I will be able to work again even after recovering because I was shot in the stomach.