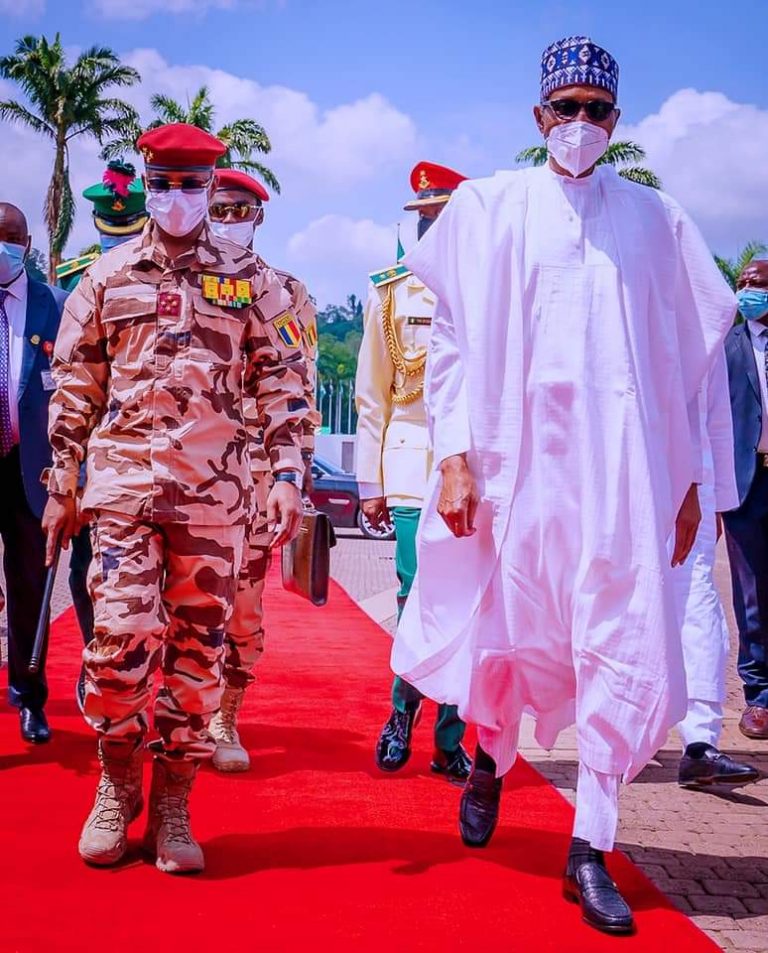 It is an uncommon development in modern days for a sitting President to die on the battlefield. But that was what happened in the Republic of Chad recently.

Marshal Idris Deby Itno, a veteran of many battles and President of Chad, had led his forces into the field, as it was his wont. He won the battle, but didn’t win the war. The war for life, for survival, after he got fatally shot.

Chad rallied itself, did perhaps the next best thing by setting up a Transitional Military Council, headed by the son of the deceased, Lt. Gen, Mahamat Idris Deby Itno. That Council is to run the country for 18 months, organize elections, and return the land to constitutional order.

On Friday last week, President Muhammadu Buhari played host to Lt Gen Mahamat Itno at State House, Abuja. Rather ironically, the visit came some weeks after the father had been hosted in the same diplomatic room, unknown to us all that it was the final adieu. He had come to say goodbye. And like they say, there’s no good in goodbye.

Lt Gen Mahamat is slight of frame. Not half as tall as his late father, who almost always stood shoulder to shoulder with our President. And Muhammadu Buhari, as you know, is a tall man.

A brief digression: It is said that after the military coup of 1967, which saw Yakubu Gowon emerge as head of state, there was the search for who would be his Aide de Camp (ADC). Some young officers were assembled, including a certain Captain Buhari, who was presented to the new leader.

Gowon was said to have looked at the proposed ADC, observed his height, and remarked: “He is too tall. People would think he’s the head of state, and not me.” Lol.

The new leader settled for one Captain William Walbe, who was not as tall as Buhari, but fortuitously, the man bypassed for his height eventually became head of state years later, and a twice elected democratic leader. Your height (or lack of it) may be indicative of many things about you.

Back to Lt Gen Mahamat, the transitional leader of Chad. He is slight of build, but that stature belies the weighty responsibility on his shoulders. He must combat a fierce insurgency against his country, fight terrorism alongside Nigeria and other neighbors, re-stabilize his country, and return the land to democratic rule. All within 18 months.

As President Buhari received him in the forecourt of the Presidential Villa, I had a sense of deja vu. Here in this same place, weeks before, Idris Deby Itno had been received. He was ushered into the Diplomatic Room, where tête-à-tête discussions held. He was hosted to lunch, addressed the Press, and then left. It was the final hurrah, but we didn’t know.

Mahamat sat in the same seat where his father had sat weeks before. And he addressed our President. He thanked him and Nigeria for the solidarity delegation sent to Chad, after the passage of his father, and recounted how the tragic incident happened:

“Mercenaries from Libya, with sophisticated weapons, had joined insurgents to attack Chad. Marshal went to face them with his troops. It was a bitter-sweet victory, because we won the battle, but lost Marshal in the process.

“Our main objective is the security and cohesion of the country. We’ve won the battle, but the war is still going on. We will have democratic, free polls in 18 months.”

Chad has appointed a Prime Minister. He is the man who came second in the presidential polls won by Marshal Itno, but he was not officially inaugurated for another term before he died. The country is setting up something akin to Government of National Unity, and will hold a national dialogue, to chart a path for the future.

Gen Mahamat said something that President Buhari had always maintained, and over which the wailing wailers would often go into overdrive. He declared that the main source of instability in the Sahel region was Libya, which was overtaken by anarchy, after the fall of Moamer
Gadaffi from power.

“Plenty of mercenaries with sophisticated weapons are threatening our region from Libya, “ Gen Mahamat submitted.

He urged the United Nations and other international organizations to ensure that the mercenaries were disarmed, “and reintegrated in an orderly fashion,” warning that if such was not done, “more chaos and instability lay ahead in the Sahel.”

Mahamat recalled that President Buhari and his late father were close friends, adding: “I am here to reaffirm that relationship, and for you to support our transition. We rely on the brother country of Nigeria, as we share history, culture and geography. We are also fighting a common fight; terrorism. We are ready to be guided by you as we return to constitutional rule.”

President Buhari told Itno the son that his father was his guest only few weeks before the sad passage, “and our relationship was both personal and national.

“In 2015, when I first emerged President, I visited all our neighbors. It made sense to do so, as we were thus able to help our countries and region.

“The situation in the North-east of Nigeria is best known by the people living there. The improvements could not have been achieved without the cooperation of Chad and Niger Republics. Nigerians know and appreciate our neighbors, and we will be glad to continue the collaboration, as we are bound together by geography.”

President Buhari said Chad has been steadfast in helping Nigeria fight terrorism, “and we will help you to a smooth transition. We will help in diverse ways we can. Don’t hesitate to ask whatever help we can render. That is the least we can do in memory of Marshal Idris Deby Itno.”

And that is President Buhari for you. Kind to both the living and the dead.

Adesina is Special Adviser to President Buhari on Media and Publicity