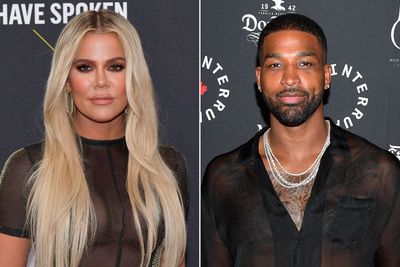 Reality TV star, Khloé Kardashian and her ex Tristan Thompson have welcomed a baby boy via surrogate.
Applesbite reports that the birth of their second child is coming seven months after their latest breakup.

According to Applesbite, the news about the couple expecting a son broke on the 13th of July, 2022.

Soldiers Beat Police Officer To Death Over Traffic In Lagos

The reports added that 38-year-old Kardashian, and her 31-year-old lover, Thompson, were not back together and have not spoken outside of co-parenting their 4-year-old daughter, True.

Kardashian and Thompson began dating in 2016 and welcomed their daughter True in 2018.

In January of this year, the couple split after allegations of Thompson’s cheating made rounds.

Prior to their split, the former couple were vocal about their plans to give True a sibling.

Kardashian and Davidson’s unexpected romance began after her inaugural hosting gig on the SNL show in early October 2021 and they officially became a couple on November 18.

The couple had earlier this week parted ways after nine months of dating because they could no longer cope with their long-distance relationship.