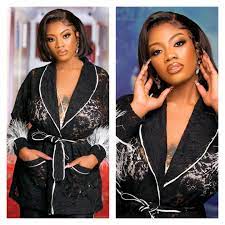 Former female housemate in Big Brother Season 6, ‘Shine Ya Eye’ Angel Smith has come under heavy criticism after encouraging women not to confess to their partner after cheating.
The former reality TV star stated this on her Twitter page on Tuesday, September 27, where she wondered why any woman would own up to her cheating.

The reality star suggested that women should ‘gaslight’ their partners rather than be in situations where they confess to the action.

In her tweet, Smith: ‘Admitting you cheated as a woman is crazy. What happened to gaslight girl boss?’

However, the reality star’s advice did not sit well with many social media users online who immediately called her out for misleading young women into doing the wrong things.

2023: Why I Stopped My Children From Relocating Abroad – Atiku

They further urged her to do better as the kind of attributes portrayed falls below expectations.

Mario wrote: ‘’I know plenty young girls look up to you and see you as there role model and stuffs…. And this is what you have to say about a girl cheating and confessing to it???? You’re actually supporting girls lying and manipulating guys even when the do something wrong? Smh.’’

Vincenzo wrote: ‘Angel is so toxic’

Dayo wrote; ‘I pray your husband sees this’