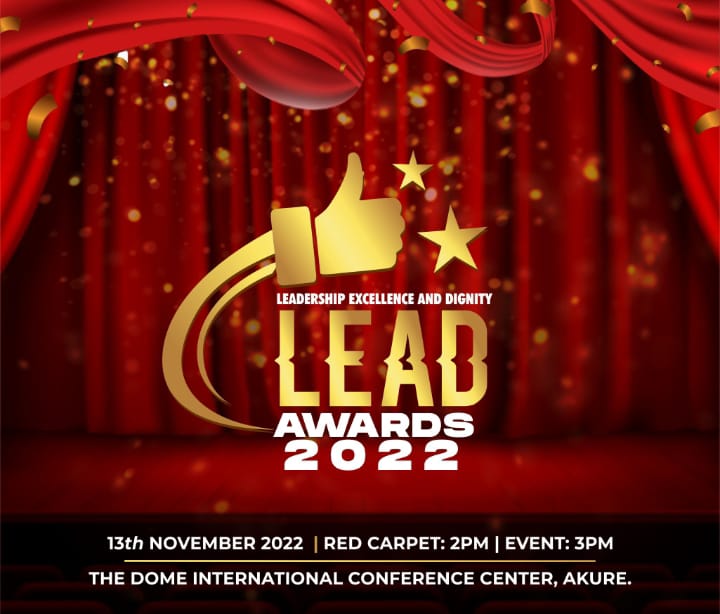 Organizers of Leadership Excellence And Dignity, LEAD Awards have annouced November 13 for the 2022 maiden edition of Lead Awards. It was also revealed that the prestigious event will hold at the Dome International Conference Center, Akure, Ondo State.

Addressing a cross section of journalists over the weekend in Lagos, the Executive Director, Abiola Alaba Peters AAP, said the evening promises to be a gathering of captains of industries, government officials and prominent traditional rulers as far as Ondo State is concerned.

“It is our pleasure to announce to the general public, particularly the good people of Ondo State, that all is set for the 2022 Leadership Excellence And Dignity Awards. This announcement was necessary after several months of consultation and planning, the event will be live at the Dome International Conference Center, in Ondo State capital, Akure”

Citizens will be Encouraged to Pay Tax, When Government Use Tax Revenue for their Direct Benefit Says FIRS Boss Muhammad Nami

“The date is November 13th 2022, It’s going to be a cooperate night, an evening of glitz and glamour, we have put in so much into making this maiden edition a memorable one. And that is why we have also taking time to design the concept of the theme of this year ceremony, REWARDING TENACITY. We believe it’s time to celebrate the individuals and organizations who have put in their best in making our dear state what it is today”

“It’s promises to be a gathering of some of the biggest names in Ondo State, from politics, business, entertainment, among others, our traditional rulers are not going to be left out, we are also expecting guests from neighboring states. Alaba Peters concluded.

Giving further details on the event, the Media and Publicity Director, Adewoye Solomon, said although activities, such as nominations and voting has kicked off since January, the award ceremony will hold on a Sunday in the month of November 2022.

In his words, “Let me start by saying that, the process and activities for the award started in January this year, the award presentation will hold in Akure, on a Sunday, the second week of November 2022. Let me also add that, two months ago, we closed the voting process. We have about 25 categories of awards, which includes the special recognition category”.

“A total of 15 categories will be decided by general public, while the remaining 10 will be decided based on the panels’ decision. We received a good number of quality entries from across the state for this debut edition. We have our final shortlists of winners, which we are confident embody the excellence the awards stand for.”

Lastly, let me also add that, this is a strictly by Invitation event. We are introducing an electronic invites by next month. We also have some top celebrities coming in from Lagos. We will make some major announcement in the month of October, do well to follow us on all our social media pages for updates. Thank You “