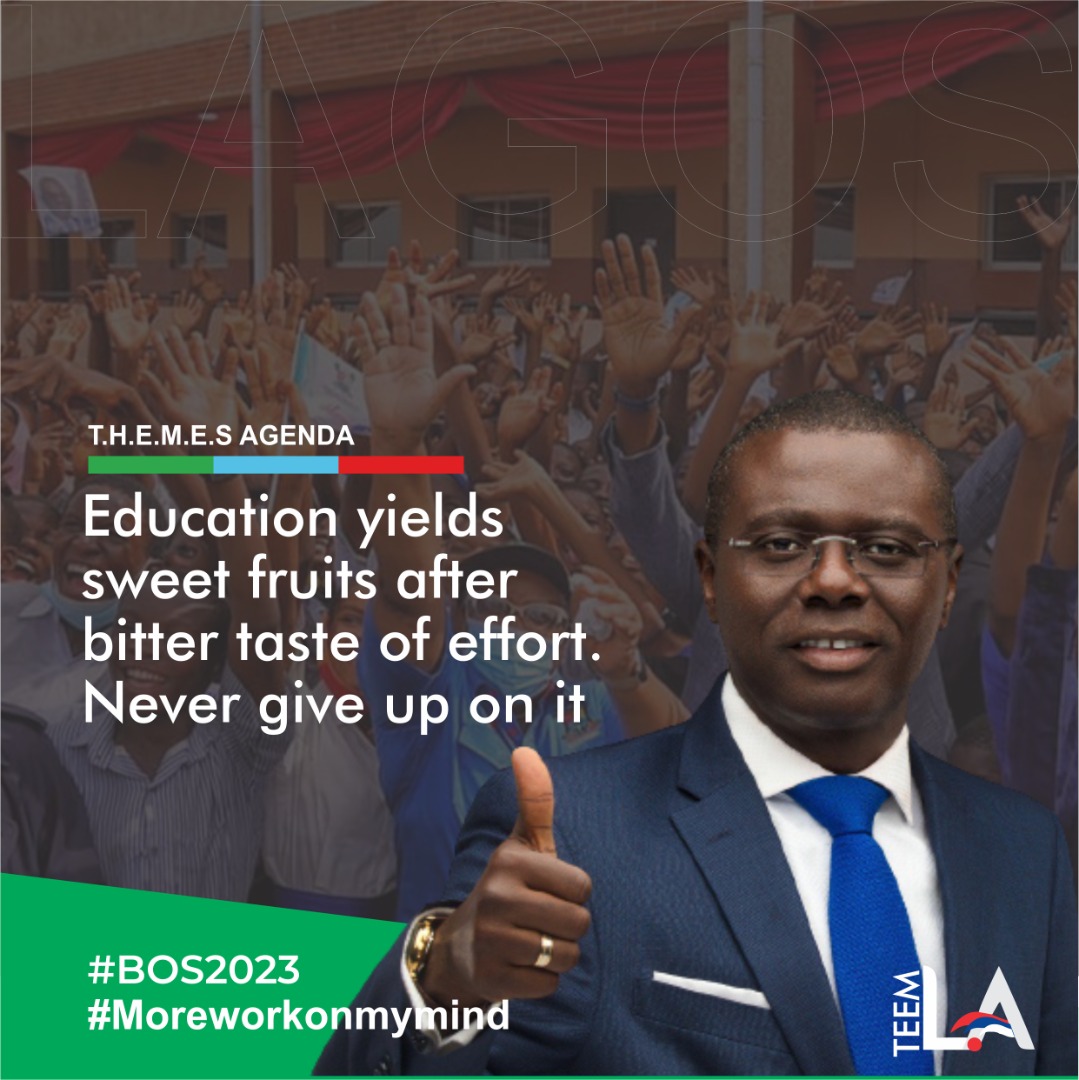 From the beginning, Governor Babajide Olusola Sanwo-Olu revealed his plans to
transform Lagos State with his T.H.E.M.E.S AGENDA, which is the acronym for 6 pillars in activating outstanding growth and development in the state for the benefits of the people.

The Governor, through this unique agenda, has demonstrated high level of purpose of achieving greatness and depth of understanding towards good governance like his predecessors, who have ruled the state in the past. For better understanding of why Governor Babajide Sanwo-Olu should be given a chance to continue the good works he started in Lagos through T.H.E.M.E,S here is an outline that explains the 6 pillars of creativity and strategic deliverables attached to making Lagos a true Centre of Excellence in Nigeria.

T- Traffic Management and Transportation: The Lagos State government, under the leadership of Governor Sanwo-Olu has integrated road, rail and water transportation systems, and continuously rehabilitated the bad roads and expanded the road infrastructures around all the 20 Local Government Areas and 37 Local Council Development  Areas (LCDAs) in the state.

There has been tremendous improvement in navigation on the Lagos waterways to facilitate water transportation, and efforts are being made to complete the Blue Line rail and begin the Red Line rail immediately. The administration has launched hundreds of Lagos Taxis Cars and Mini Buses to support the masses with better and affordable means of transportation. 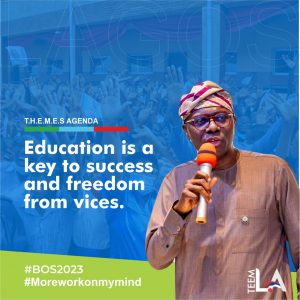 Traffic management is number one on the to-do list of the state government, hence the government has a robust plan to alleviate the traffic challenges in the state as a metropolitan city and an emerging megacity with all the accompanying facilities found in most developed cities in the world such as Dubai, New York, Paris, Amsterdam, London and others.

H- Healthcare and Environment: The healthcare system in Lagos State has been anchored on a comprehensive health insurance scheme for all residents to make healthcare accessible and affordable. And the state government has ensured that most healthcare institutions; primary, secondary and tertiary are fully equipped, well managed and operational. This is seen in prompt healthcare delivery now found in most government hospitals all over the city.To keep our environment clean and sustainable, the Lagos State Government has provided better waste management and disposal facilities.  The waste management system has also intensified drive on waste disposal, where people who properly sort their waste for collection are rewarded.

E- Education and Technology: The Lagos State Government has planned to increase access to public education in Lagos, especially primary and secondary schools. The state government has embarked on immediate and mass renovation of public schools in the state to make them conducive for learning in all the Local Government Areas and Local Council Development Areas (LCDAs).Teachers have been trained and retrained to upskill them for modern teaching methodology. The government has also engaged and encouraged tech start-ups to flourish and ensure that the children are in tune with the technological advancements found in most parts of the world.

It had also supported about 200,000 businesses till date.

MSME Loan Programmes: the fund aims to promote entrepreneurship in Lagos State by improving access to finance and strengthening the institutional capacity of MSMEs. The loan scheme, which attracts only 5% interest rate per annum, is available to business owners who are registered residents of Lagos State.

LSETF Employability Support Project: The LSETF Employability Support Project, is designed to help tackle the unemployment scourge among the youths by helping them gain requisite knowledge and skill through vocational trainings and subsequently helping them get job placements. It aims to train 10,000 young people to gain skills in 6 sectors namely – Manufacturing, Hospitality, Entertainment, Construction, Health and Garment Making that will help place them in line for immediate employment.

Lagos Innovates: Lagos Innovates, is a series of programs designed for the benefit of technology- and innovation-driven startups in Lagos State. By providing access to high quality infrastructure, learning, capital and networks, Lagos Innovates hopes to cement Lagos’ position as the leading destination for startups in Africa

MSME Loan Programmes: 11,027 businesses have been funded to the tune of 7.20 billion naira.

Lagos Innovates: Issued 97 workspace to startup businesses in the tech space, created over 97,000 new jobs and added over 48,000 new taxpayers to the bracket.

The government has also simplified access to government services to make the sector thrive. Power supply and Housing are issues that are already on the front burner for the Lagos State government to deal with. These are being achieved through strategic policies, proper planning and required efforts that will manifest in the nearest future.

E- Entertainment and Tourism: We all know that Lagos is the hub of culture and entertainment. The state government has created a viable and vibrant economy with tourism and entertainment. Over time, Lagos State have organized Greater Lagos Fiesta,  Lagos Digital Party, Lagos Comedy Show and many more. The government has developed all tourism sites and assets in Lagos state and created a tourism calendar around  important events such as the Eyo Festival, Lagos Global World Theatre Day, Eko Film Festival and Lagos Fishing Festival and Lagos Cultural Day such that it will attract local and international tourists.

S- Security and Governance: An integral part of the T.H.E.M.E.S agenda is upholding of law and order which is captured under Security and Governance. The Lagos State government has laid down solid plan to clamp down on criminals, land grabbers and other trouble makers to reduce crime and all form of security threat to the bearest minimum. No doubt, Governor Sanwo-Olu administration has zero tolerance  for criminals, and it is poised to ensure that the poor and downtrodden in the society have access to justice through good governance in the state.

More so, looking at the successes of the current government, you would surely agree with millions of Lagosians that governance is a continuum; and the best way forward is to give Governor Babajide Sanwo-Olu the deserved chance to be re-elected as the Governor of Lagos State in 2023 as T.H.E.M.E.S is the KEY  progress drivers for desired growth and development to make Lagos the 21st Century economy against all odds.Governor Babajide Olusola Sanwo-Olu has proven to be a round peg in a round hole.

He is a compassionate leader, a man of his words; who has never left any stone unturned in his determination to ensure that Lagos State maintains its position as the centre of excellence, where things are happening and the best place to be in Nigeria. Moving forward, Governor Sanwo-Olu deserves a second term, not for self aggrandizement, but it is a way to show that he can do it again bigger and better and that a winning team should be encouraged to continue what they have started.