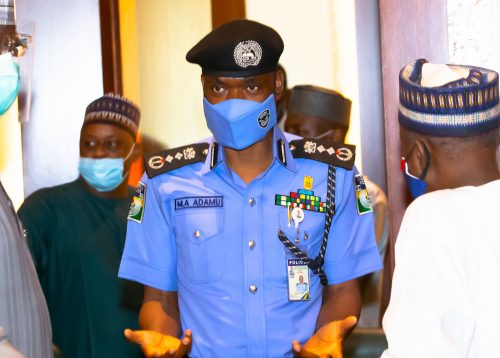 The Inspector-General of Police, Mohammed Adamu, on Sunday, revealed the requirements of officers to be trained in the new police tactical team to replace the disbanded Special Anti-Robbery Squad.

He said the training of selected officers for the Special Weapons and Tactics team would commence on Monday, October 19, 2020.

The IGP noted that no ex-SARS operatives were shortlisted in the SWAT team.

Adamu also explained that “the officers selected for the training are young, smart and energetic officers who have acquired not less than seven (7) years working experience with clean service records – no pending disciplinary matters, no record of violation of rights of citizens or misuse of firearms – and are physically fit to withstand the rigour of SWAT Training and Operations.

“The selected officers shall be subjected to the physical fitness test, medical and toxicology screening etc and those found to be unsuitable shall be discharged.”

This was contained in a statement on Sunday by the Force Public Relations Officer, DCP Frank Mba. The statement was titled, ‘NPF New Tactical Team Commences Training Monday, Oct 19’.

Adamu promised Nigerians that the SWAT team “will operate within very high professional and ethical standards, rule of law and dictates of best international policing practices.”

He also disclosed that to ensure adequate training and screening of SWAT operatives, the Nigeria Police Force has partnered with the International Committee of the Red Cross and other development partners for the training which begins tomorrow at the Police Mobile Force Training School, Ila Oragun, Osun State and the PMF Training School, Ende Hills, Nasarawa State.

He said the ICRC “will handle topics touching on humanitarian laws, police conduct in conflict situation, human rights standard especially in the use of force and firearms, arrest and detention amongst others.

“The training modules will be handled by other carefully selected development partners, security experts as well as veterans from the civil society and human rights community.”

The IGP sought the cooperation of Nigerians “in the ongoing development drive for a new and reformed Nigeria Police Force” while “he enjoined them to be patient and to believe in the reform processes which are all directed at ensuring the security, safety, and rights of all.”

For about two weeks now, the #EndSARS protests have been taking place across major cities in the country with youths calling for the reform of the police force.

Major highways across the country have been blocked thereby grounding economic activities.

The youths have been resolute and firm in their stand that they would not leave the streets until the much-needed reforms were actualized.