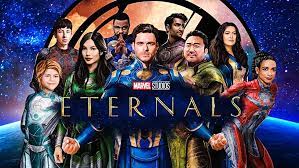 Marvel Studios new offering, Eternals has been withdrawn has been banned from cinemas in Nigeria.

Eternals was billed to premiere this weekend. However, it is no longer on cinema schedules.

Its Debut in Nigerian cinemas was on November 5. Unfortunately It is no longer on Cinema screening schedules.

However, cinemas are yet to comment on the sudden withdrawal of showtimes. The NFVCB is also yet to speak up on the issue. The board has maintained a zero tolerance for gay content in Nigeria over the years.

The Marvel film has sparked global controversy in countries like Saudi Arabia, Qatar e.t.c. The movie is banned in these countries due to the same-sex scenes shown in the film.

The director however shared in an interview her hopes for the film.

‘The Eternals’ stars big names – Angelina Jolie, Lauren Ridloff, Brian Tyree Henry, Salma Hayek, and many others. They portray a new set of superheroes in the Marvel universe. It will be the first Marvel film to brandish same sex relationship.